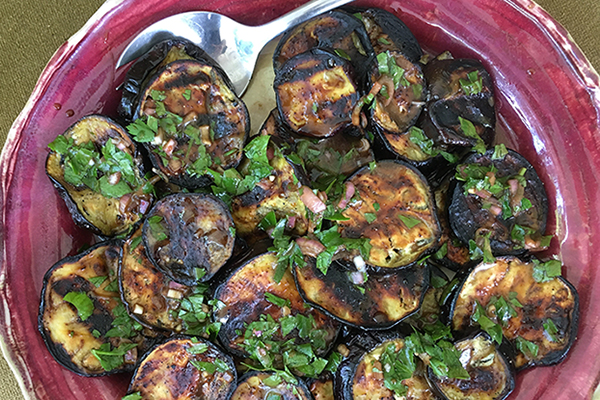 Summer isn’t over yet, and whether you grill the eggplant on the barbecue or bake it in the oven, this seasonal side dish is a winner. I also like the fact that you can prepare it ahead of time, even a day or two, and add the vinaigrette just before serving.

For the vinaigrette, go heavier with the vinegar than the oil than you would for a traditional dressing, maybe half and half. Stir in some minced shallot, a dab or two of Dijon mustard, lots of chopped parsley and salt and pepper to taste.

Cut your eggplant into ¼-inch slices, lightly salt both sides and set aside for five minutes. Wipe the colored droplets away with a paper towel and then toss the eggplant with some olive oil and salt.

Set the slices on a medium hot grill or on parchment in a 375-degree oven. Cook until browned on the outside and creamy through the middle, making sure to flip once or twice. Serve right away or later at room temperature with some chunky spoonsful of the vinaigrette over the top.