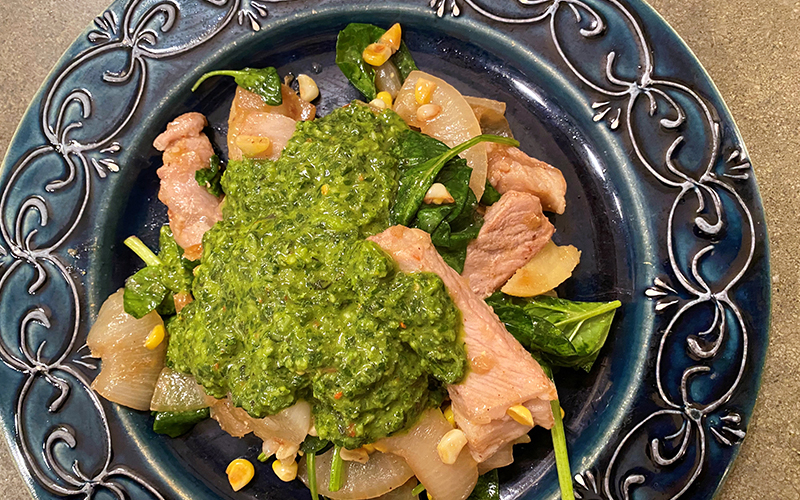 With the price of supermarket meat so high these days, now is the time to be buying locally-raised meat if you aren’t already. I used Gaylord Farm’s boneless pork loin chops along with some local basil for this dinner for two.

Slice a pound of loin chops into ¼-inch thick strips, generously salt and pepper and set aside in the fridge. Next, quarter and slice a sweet onion, cut the kernels from two cobs of corn and set aside with an extra-large handful of spinach.

Make the chimichurri in a food processor by combining 1 cup of fresh basil leaves, ¼ cup of parsley, two garlic cloves, 1/4 cup of red wine vinegar or fresh lime juice, ¼ teaspoon of kosher salt and some red chili flakes and black pepper. With the processor running, drizzle in 1/4 cup of olive oil and run until smooth. Salt to taste … now you’re ready to get cooking.

Heat some oil in a wok over medium high heat and cook the onion until translucent.  Add the corn, give it a minute and then toss in the pork. Stir frequently until the pork is cooked through, it won’t take long.

Take off the heat and stir in the spinach. Once wilted, serve with a heaping spoonful or two of chimichurri over the top.