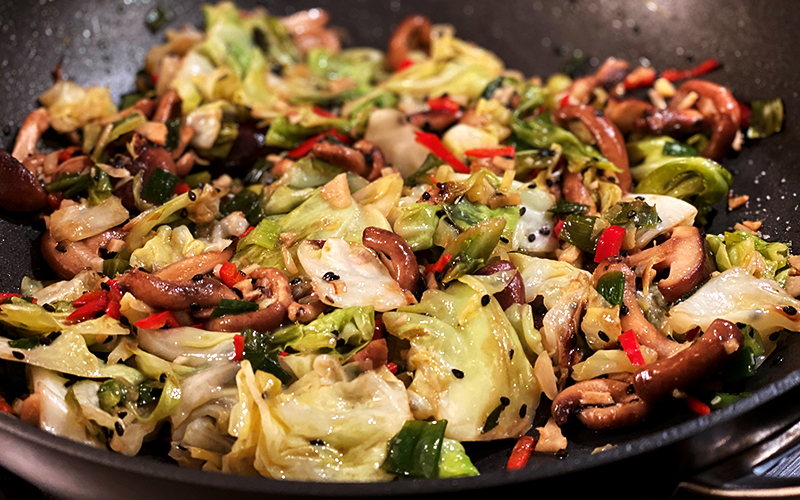 If you don’t do a lot of stir fries, you’re missing out on one of the easiest ways to whip off a last-minute meal. And the key to a good stir fry is simple, good ingredients, especially when it comes to the ginger and garlic … always go with the fresh stuff.

Garlic doesn’t take much to deal with, but until someone showed me how easy it was to peel ginger by scraping it with an upside-down teaspoon, I used to think it was kind of a hassle … what a life-changing event that was. Even more life changing, throw a cut-up piece of unpeeled ginger root in your food processor, you won’t even notice the skin once it’s minced up. So, no excuses, use the real deal and use lots of it.

After prepping all your vegetables, heat some veggie oil over medium-high heat in a wok or large heavy pot. For this cabbage, shitake mushroom and scallion stir fry, I started by throwing the chopped cabbage in the wok first as it takes the longest to cook.

After a couple of minutes, add the mushrooms, scallions, ginger, garlic and some fresh chili pepper if you want a little heat. I like the Fresno peppers myself.

Toss the mixture often for another four to six minutes, you don’t want the veggies to soften too much and then salt to taste. At this point you can also add some sesame seeds and/or sesame oil for a bit more flavor. But it doesn’t need it, the ginger and garlic are all it takes.