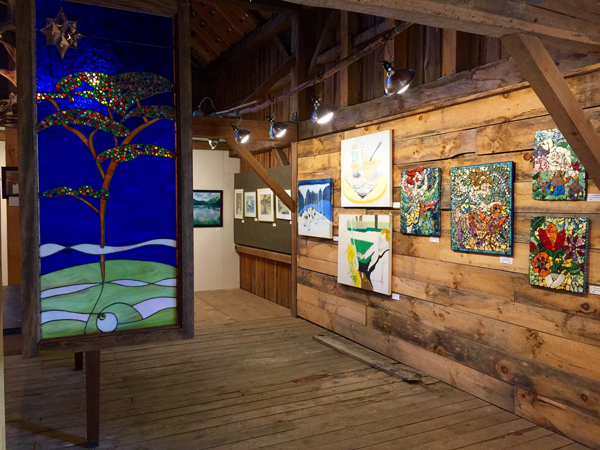 At the end of 1997, the (then) Sugarbush Chamber of Commerce committed to a change in name and direction in order to focus on business development and in marketing and event development to encourage more summer tourism.

Early in 1998, detailed planning began for what would be the first Vermont Festival of the Arts, to be held August 14 through 23. The Mad River Valley Arts Committee was formed with representation from varied arts-related segments of the community. Chamber board member Dotty Kyle, chair of the chamber’s new Valley Events and Marketing arm (VEMA), was tapped to organize artists for an exhibit. The committee at that time included Joan Lane, Sue Stager, Dorothy Warren, who has since moved out of The Valley, and Dotty Kyle. Ellen Crafton and Karin Ware joined the committee during its third and fourth years. More recently, Carole Crossman, Kate Burn, Julie Burns and Jane Wollmar have signed on to help with the show.

A few rules for the “first annual Group Art Exhibit” were made for the show and have been adhered to for the entire 19 years of the show’s existence. Participants must live either full or part time in towns touched by the Mad River; the show will hang with no jury of selection – all local artists are welcome; work must be framed and ready for hanging; all artists must commit to “sitting the show” (being docents while it is open); and there will be no commissions taken on artwork sold.

In 2002, after the fifth annual art exhibit at Warren Town Hall, the committee was told the town needed more space for municipal offices and planned to move the library into the old Town Hall. A conversation with George Schenk, owner of Lareau Farm/American Flatbread, led to a lasting relationship. The Big Red Barn at Lareau Farm has been home to the art show since 2003. That year the show had grown to a two-week, three-weekend exhibition with 23 artists showing 63 paintings and sculptures. This year, the 19th annual Big Red Barn Art Show exhibits nearly 200 works by 40 artists.

In 2005, the Valley Arts Foundation was incorporated as a not-for-profit organization to take over the festival’s operations and the Big Red Barn Art Show officially joined Valley Arts, continuing its standing as an anchor event of the festival.

As the number of artists participating in the show has increased, the show’s format has grown as well. Each artist is given the opportunity to exhibit four paintings, plus two small works for a separate exhibit. Artists who make reproductions of their paintings, which are not allowed in the regular show, may bring them, as well as note cards reproduced from their original works, for sale at the very popular “Art Stall.”

New this year is the inclusion of a guest artist. The intent is to invite one artist from outside The Valley to exhibit each year. This year’s guest is Richard Coyne, an artist from South Carolina, who has been coming to The Valley for the past three years to paint in the festival’s Great Vermont Plein Air Paint-Out weekend. Four luminous oil paintings of Valley scenes are his addition to the show.

The show is open the same days of the week as American Flatbread, Thursday, Friday, Saturday and Sunday, from noon until 9 p.m. Children visiting the show are encouraged to participate in the Art Treasure Hunt, looking for images in specific paintings.