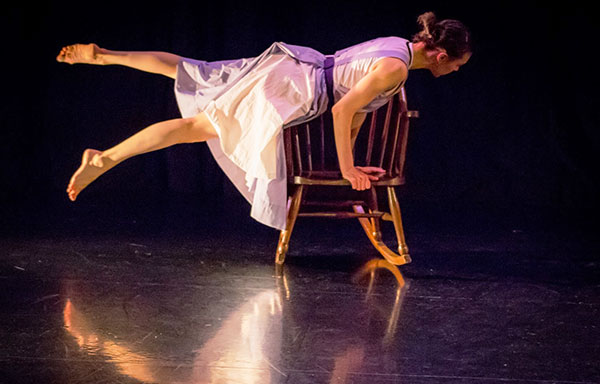 The legacy of Frank Lloyd Wright comes into sharp focus at Phantom Theater this Friday and Saturday night, August 17 and 18, at 8 p.m., in “Mrs. Wrights,” a tour-de-force one-woman show by Wisconsin-based performance artist Jenni Reinke.

While the name of the iconic American architect is almost universally recognized, few people remember the women who loved and were loved by Wright. Still their influence on his work and life is profound. Through dance and physical theater, Reinke reveals five dynamic women – his mother, three wives and longtime mistress – whose colorful personal stories provide a window into an important shift in American culture.

“Collectively, their lives span the years 1869 to 1985 and mirror 19th- and 20th-century women’s history in America. I want my performance to give voice to their experience,” said Reinke.

The piece centers on Wright’s third and last wife, Olgivanna, a devotee of the internationally famous spiritualist, GI Gurdijeff. Olgivanna introduced theosophical concepts to Wright and founded the Taliesin Fellowship with him. In Reinke’s rendition, upon Lloyd’s death Olgivanna turns her grief into a dramatic channeling of the women who flowed through her husband’s life. “With Wright as the common denominator, my biggest challenge has been creating a show that is ultimately about the women rather than the larger-than-life architect. Of course, the show will necessarily be about him to some extent. This has been a productive tension in my creative process,” noted Reinke.

Exploring intimate spaces through “the architecture of the body,” Reinke’s own art seems particularly suited to the material. Olgivanna herself was a master of sacred dance and a composer, so “it feels appropriate to tell these stories using the modes she practiced,” according to Reinke.

Though “Mrs. Wrights” is a one-woman show, its success relies on other creative collaborators. “Costuming plays an important role in distinguishing one character from another and in highlighting the span of history the women inhabited,” Reinke explained. She worked with Milwaukee-based costumier Leslie Vaglica on the logistics of on-stage costume changes for six characters – five women as well as Frank Lloyd Wright. “The costumes she built are gorgeous,” said Reinke. Her creative and life partner, Brian Rott, serves as dramaturg and lighting designer.

Phantom Theater’s artistic director, Tracy Martin, believes “Mrs. Wrights” is a perfect match for the Mad River audience. She met Reinke while the two were in graduate school together at the University of Wisconsin. “This is her thesis performance (for an MFA in dance and choreography),” said Martin. She added that Reinke “is an outstanding performance artist. When I heard her thesis was regarding Frank Lloyd Wright, well, given this community of architects, it was a natural.”