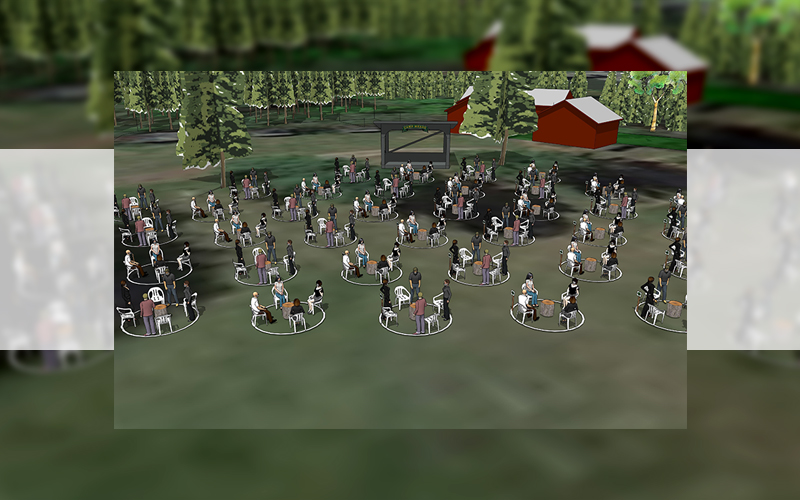 Camp Meade in Middlesex is putting together Sustenance – Body and Soul, a physically distanced, yet socially together event to raise funds for the Vermont Food Bank and Hunger Free Vermont and to help meet the immediate food needs of Vermonters.

‘While our goal is to raise money for these two great organizations, another very important goal is to raise awareness about the systemic causes of food insecurity. Hunger is a result of lack of money. People need to understand what some of the long-term systemic solutions can and should be,” said organizer Russ Bennett, one of the three principals in Planetary Matters which owns Camp Meade.

Body and Soul will be held on the green at Camp Meade. The green was formerly the home for a Civilian Conservation Corps work camp in the 1930s when the original and important New Deal initiatives were initially implemented.

“Those social justice programs are part of the DNA of Camp Meade,” Bennett said.

FEED THE BODY, FEED THE SOUL

Body and Soul takes place Saturday, September 12. It will feature displays of educational material about food insecurity as well as some speakers, music and food throughout the day on the green.  The green will be open and free to the public during the day.  Kat Wright Trio will headline the evening offerings with a ticketed concert. The evening shows will be reserved seating cabaret-style. The seating will be four seats each separated by 6 feet or more on a 10-foot diameter circle. The cabaret circles will be separated by 8 feet in every direction.  There will be some food and beverage service to the reserved circles.

This event will be sponsored in part by Lost Nation Brewing and Red Hen Bakery.

“We are still accepting sponsors for this worthy and fulfilling event,” Bennett said.

The date is Saturday, September 12, with the green opened free of charge to the public from 10 a.m. to 5 p.m. and open for ticket holders from 6 to 10 p.m. Circles can be purchased at www.campmeade.today.

Bennett said that the name Body and Soul is a tribute to the social justice messages of the original 1925 film “Body and Soul,” as well as a 1947 remake of the film. The 1947 remake he said was about a boxer who wins his first big match, drawing the attention of a promotor.

At the time, film critic Dennis Schwartz noted that the film had a sociopolitical message. He said that this version was more than a boxing and film noir tale as it was also a socialist morality drama where the pursuit of money becomes the focus that derails the common man in his quest for success. The boxer was seen as a victim of the ruthless capitalistic system that fixes everything including athletic events, as the little guy is always at the mercy of the big operator.

“There was a third remake in 1981, about a boxer who planned to study medicine but decides to continue to box because he has a sick sister in need of costly care,” Bennett explained.

“His rise was rapid, and he was seduced by his newly extravagant lifestyle with threatens his relationship with girlfriend and tests his loyalty to his family and himself. All three films show that unmitigated capitalism does not create a just society and ultimately points to some root causes of food insecurity in our society,” he added.

Finally, Bennett said, the Body and Soul event celebrates the jazz classic Body and Soul which lines up with Planetary Matters’ mission of feeding people what they need for their bodies and their souls.