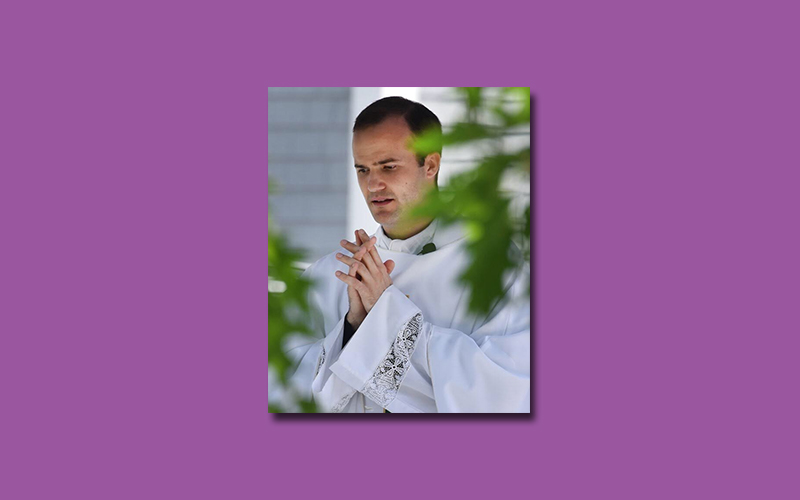 Thirty-three-year-old Father Matthew Rensch is the new priest serving St. Patrick Church in Moretown and Our Lady of the Snows in Waitsfield. He took the post in early July. Before coming to the Waterbury and Valley area, Father Matthew was born in Binghamton, New York. When he was 5, he and his family moved to Williston. Following school at Christendom College, a Catholic liberal arts college in Virginia, he decided to go into the seminary. After seminary school in Rome, he was assigned to a church in Rutland, working with Father Bernie, who was the pastor at St. Andrew Church in Waterbury from 2000 to 2006.

Reading is one of Father Matthew’s hobbies. He says he likes to read philosophy. One of his favorite books is called “The Philosophy of Saint Thomas Aquinas: A Sketch” by Stephen L. Brock. He also enjoys basketball. Recently, with the help of the Waterbury Recreation Center, a new basketball court was built in the parking lot behind St. Andrew Church in Waterbury, where his office is located.

Father Matthew didn’t always know that he wanted to become a priest. “There were definitely a couple of steps along the way, but one of the clenching moments was at the end of college,” said Rensch. He explained that he was on the fence and called a priest at his school, the vocations director (the director for seminarians), for advice. The vocations director told him, ‘Listen, you will always be able to find a good reason, a reason that makes sense, to delay going to seminary. So, if you start delaying, you’ll just never join.” By 2016, at age 29, Rensch was ordained a priest.

Rensch also described another experience that was important to strengthening his faith. During high school he read a book called “Mere Christianity,” one of C.S Lewis’s lesser known works, but a hidden treasure, according to Rensch. “It was exactly what I needed at the time,” he said. The seeds of doubt in his mind had not sprouted yet, but with every page his questions were answered, his seeds of doubt never able to germinate.

When asked what he would say to the people who want a connection with God but might feel excluded from the Catholic church because of their gender, sexual orientation or political beliefs, Rensch said, “If he (God) is the one that made us, then he is the one that can fulfil us. Throughout history there have been people who have lived very holy lives (saints). What we see in the lives of the saints is how satisfying and how fulfilled, and amazing they could be with very few earthy benefits of attachments.” Meaning, he said, that people can find peace, as the saints did, by being nonmaterialistic, kind and humble.