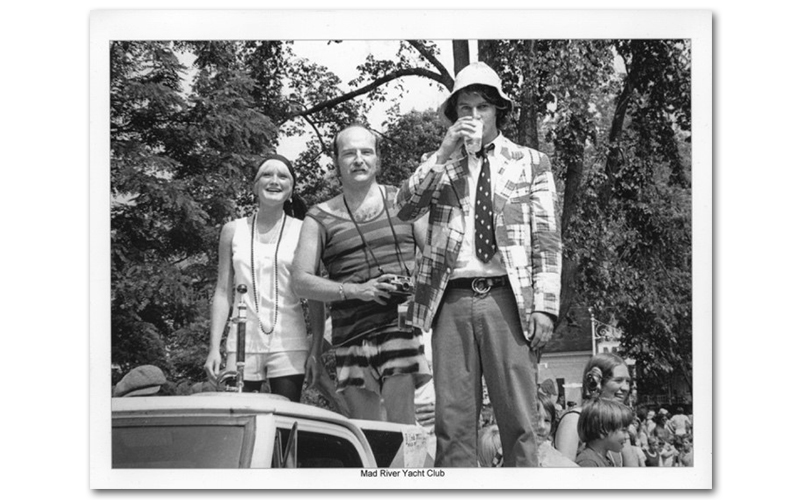 We were sitting by the river enjoying another Round Up event. (Thank you, Johnny and Sarina of The Sweet Spot, we try not to miss a single one.). As usual, food trucks were circled and children were jumping into the river. A crowd was gathering. The music started to play, and my friend Brooke Cunningham and her dog Beanie joined me at my table. She asked, “Did you know that The Valley had a Yacht Club?” Brooke grew up sailing so, though my brow was furrowed, I tried to believe she knew what she was talking about. Still, I was confused. How could somebody sail here in The Valley?

“What do you mean by yacht club?” I asked.

“The club is an official member of Lloyd’s Registry of Yachts and Yacht Clubs. Still is. You should talk to Chris Pierson about it. His nickname is The Commodore,” Brooke replied.

As luck would have it, I found Chris on Facebook and sent him a private message from Vermont to Belair, Carriacou, in Grenada, where he and his wife Patty now live. How nice that he responded quickly.

He said, “There was a dearth of snow the beginning of the winter of 1973-74. In the middle of January, the landscape was monochromatic.

“Snowfall pools began in earnest at Sam Rupert’s. Anything for excitement. One had to guess the date of the first measurable snowfall. Can’t remember the depth of snow to qualify as measurable.”

(Since Sam Rupert’s no longer exists, let me illuminate you with the words of Jon Jamieson, “It was originally built by Mahlon Jamieson as a “sugar shack” and breakfast spot for ski tourists when Sugarbush opened. The place was featured in a Vermont Life article and had great pics of my grandfather and the Jet Set/Mascara Mountain crowd sitting around eating sugar on snow.” Apparently, it was quite the hot spot.)

Chris went on, “Not being a skier, it didn’t bother me as I was able to spend more time at Rupert’s with my skier friends.

“One night I wanted to share with my friends one of my passions – sailing -- and create a diversion to the no-snow funk, so I decided to throw a commissioning party for the newly formed (that night) Mad River Yacht Club. Since I was the creator of the club and party, I bought one or two rounds of drinks for the bar as I declared myself Commodore. If one is buying the drinks, they can be called by whatever moniker one chooses.

“Had so much fun at the commissioning party, I decided we needed to have a decommissioning party the next night. I dressed for the occasion with my sou’wester, button-down shirt, tie and extremely gaudy, patched madras sport coat with yellow, red and plaid patches and my Nantucket reds. My new official Commodore’s outfit which I wore for special occasions.

“My outfit and my continued generosity (praise be to the bartender who pulled me aside to encourage restraint) cemented my new nickname of Commodore.

“To memorialize creation of the Mad River Yacht Club I did what any self-respecting Commodore would do, registered the Yacht Club in Lloyd’s Registry of Yachts and Yacht Clubs. Inclusion in the registry was prestigious and also very easy to do. Just complete the form. No verification, nothing. The Clubhouse was the Snuggery (now Hyde Away) with dues and initiation fees higher than the New York Yacht Club. David McCourt designed the burgee (flag) for the club, a bloodshot eye with a series of parallel waves coming out of it. I missed the deadline to be included in the hard copy of the registry, but we were added to the subsequently published addendum.

“For the next two summers the Mad River Yacht Club hosted a “tube regatta” which began at the Punchbowl and ended at the Lareau Farm swim hole.

“I began receiving personal letters from Taiwanese boat builders appealing for an audience with our affluent members. The best perk went to one of my friends who was sailing in Maryland on a busy summer weekend. Looking for a place to berth his boat he tied up at the end of the dock of the Annapolis Yacht Club. The dock boys told him he had to move…. until he told them he was the Commodore of the MRYC. A quick trip to the clubhouse and search in Lloyd’s verified the existence of the seemingly esteemed club and my friend and his crew were given carte blanche at the club with a free berth for the night.

“From the commissioning party at Rupert’s until today, my longtime friends still refer to me as Commodore.”

The 70s were particularly riotous times here in the Mad River Valley. Many who enjoyed them tell me wild tales, but they are hesitant to go on the record. After all, they are parents and grandparents now. So, an especially big thank you to Chris, for writing and taking us back to 1973.

How about you? Are you willing to tell a story? A memory? Please email This email address is being protected from spambots. You need JavaScript enabled to view it..