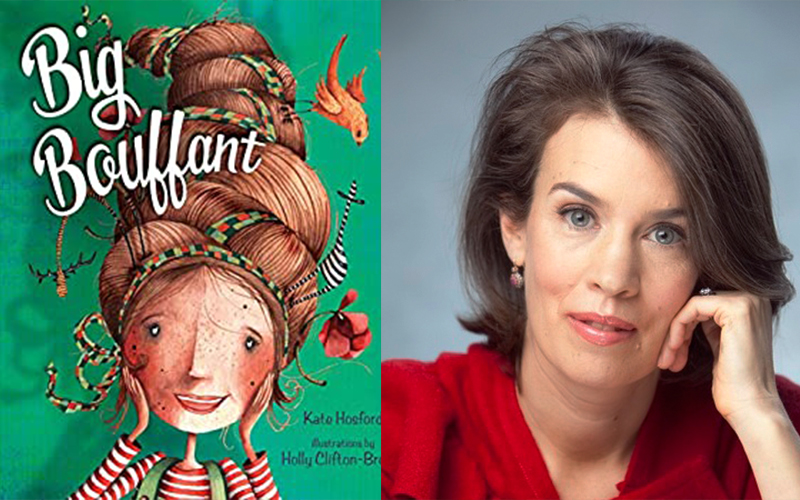 Kate Hosford, a 1984 Harwood Union High School graduate, is the author of seven books for children, including “Big Bouffant,” “Mama’s Belly,” “Infinity and Me,” and others. “Infinity and Me” has been translated into simplified Chinese, traditional Chinese, Korean, French, Greek, Romanian and Italian.

Hosford has an MFA in Writing for Children and Young Adults from Vermont College of Fine Arts in Montpelier. “I did not always know I wanted to be an author,” she said. “However, I did read a lot as a child. My parents were really the first ones who prepared me to become a writer. My mother is an educator and an avid reader. She read to my brother and me constantly.”

After stints as a foster care worker and a fifth-grade teacher, Hosford trained as an illustrator before turning to writing. “I started writing picture books when I was about 35, hoping it would get me more illustration work. My first attempts at writing picture books also coincided with the time when my children were very young, and I was spending a lot of time reading to them. It soon became clear that I was better at painting pictures with words, and I decided to focus exclusively on writing.”

“It took me 10 years to publish my first picture book. This is fairly typical. I once announced this fact at a kindergarten school visit, and a little girl raised her hand and told me I shouldn’t feel too badly, it would probably be easier the next time. She was partly right. The hardest part is often publishing the first book. However, even now, for every story or poetry collection that is published, I have many others that are not. The key is just to keep writing.”

“One of the best parts of being an author is hearing directly from my readers. Sometimes a parent will say that a book I’ve written is one that their child asks to be read out loud repeatedly. Other times, a teacher or librarian will invite me to speak to their school if they like one of my books. I’ve also gotten some great illustrated thank you notes from kids over the years. These are very special moments.” She has done virtual author visits during the pandemic, though says nothing beats an in-person event.

While she and her family live in Brooklyn, her parents, Carol and Charlie Hosford, still live in Waitsfield, and she enjoys coming back to ski, visit swimming holes and relax. “We enjoy living in Brooklyn, but it is great to know that we always have Vermont waiting for us,” she said.

During the summer of 2020, Hosford and her family spent six weeks in The Valley. While here, she worked on a book about an adult and child collecting wildflowers, which will be published in 2024.

“I was definitely picturing the land around my home when I wrote this book, and there is even a cameo appearance by the Belted Galloways who used to graze in a field near our house. Lately, I have been writing a lot of poetry that is related to animal science. I’m also working on a story about an inventor who befriends a hedgehog poet.”