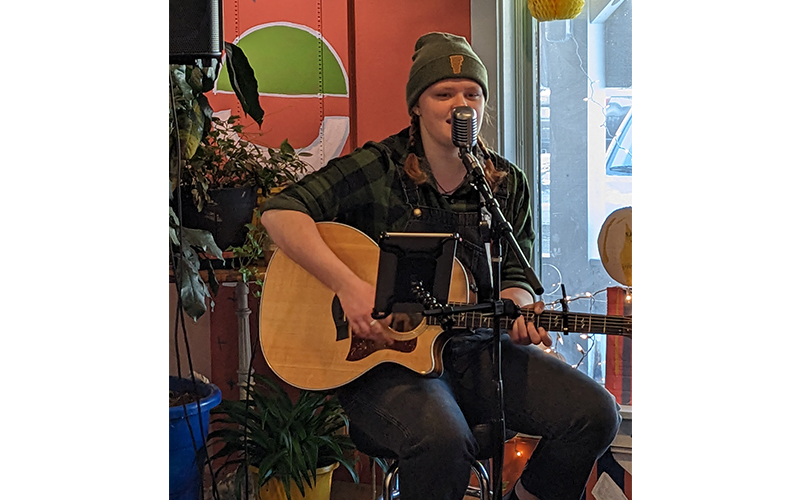 Madigan Linnane, 20, has been playing guitar since she was 8 and started writing songs when she was 10. She said she has loved singing all her life. She released a Christmas single in 2016 and released her first album, “Beautiful Me,” in 2019. She is hoping to put together another album in the coming year, while studying music at Berklee College of Music in Boston. She is majoring in songwriting and music business and hopes to continue writing and performing music. “I would love to keep songwriting as part of my life,” she said.

While staying at home in Warren for the holiday break, Linnane has performed at various venues around The Valley, including Lawson’s, Alpino Vino and Three Mountain Café. She has also performed at Zen Barn in Waterbury.

Linnane calls her music pop indie folk and plays covers as well as original songs. Her favorite musicians include Pink, Barnes Courtney, Sara Bareilles and American Authors. She writes in her songs about things she observes and experiences. During the pandemic, she wrote “We Rise,” about the political atmosphere and quarantine, which she called “a message of perseverance.” Her song “Untold” is about anxiety and mental health and “Not Broken” is about pride in the LGBTQ+ community. “I try to cover a lot of different things in order to connect to as many people as I can,” she said.

“I love writing songs because it’s really a way for me to express myself and work through my mental space. It helps me sort through things. I love when I can connect with other people and have a shared experience. One of my favorite things about performing is when I can make someone recall a memory or laugh or smile or get through a tough time. In today’s world, we’re divided in lots of ways. Music is a way of finding common ground. It’s really cool how music brings people together. We all have some sort of connection to music. It plays a role in all our lives.”

In addition to guitar and vocals, Linnane plays the piano and ukulele and is learning the electric bass and drums. “I’m trying to expand my abilities,” she said. She has begun performing in Boston and said she is working on breaking into more venues. She currently has a few singles in the works and is hoping to release a full album soon.

Linanne’s family has lived in Warren full-time for three years. “I’ve definitely taken inspiration from The Valley,” Linnane said. “I love the nature up here. It always calms me and brings me peace. It’s really nice to come home and let go of stress. One of the things I love is the community. I love that you can go almost anywhere in The Valley and know someone.” She’s currently working on a song called “Mad River Valley.”

Linnane added, “Thank you to my family who have been my biggest supporters, and have really encouraged me throughout my musical endeavors, and thank you to all of the businesses that have offered me the opportunity to share my music and get my name out there.”

Listen to her music at madiganlinnane.com.