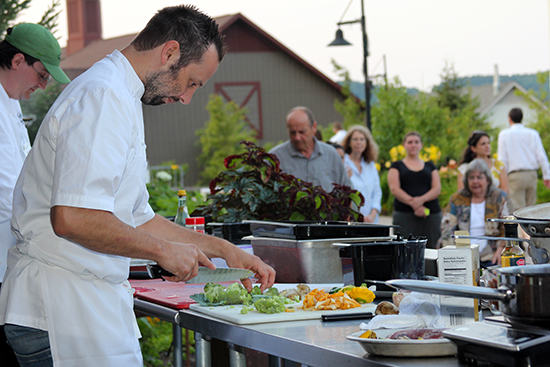 To get the most out of all the veggies and meat in The Valley, it helps to know how to prepare them.

On Sunday, August 11, Sugarbush Resort hosted its first-ever Iron Chef Competition as part of the Vermont Festival of the Arts' Taste of The Valley. After sampling small dishes from over two dozen local restaurants and food purveyors, the evening's attendees voted for their favorites to face off in a cooking challenge a la the popular Food Network show.

In Sunday's competition, chef Adam Longsworth of The Common Man in Warren and chef Todd Dibkey of the resort's Timbers Restaurant had 40 minutes to prepare two dishes centered around a protein announced at the start of the competition: pork liver and beef tenderloin from Gaylord Farm in Waitsfield. 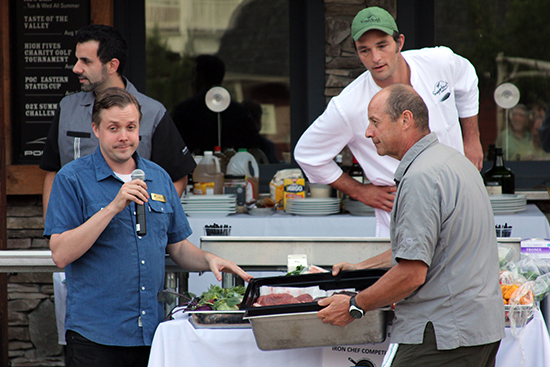 In addition to the meat, the chefs were tasked with using five out of seven ingredients from other local farms and producers, including blueberries from Knoll Farm in Fayston and ricotta from Three Shepherds Cheese in Warren. The two-person cooking teams also had access to the garden just outside Sugarbush's Gate House Lodge, where the competition took place, and both picked herbs and edible flowers to garnish their dishes.

Bruce Hyde of Timbers Restaurant served as emcee for the Iron Chef Competition, keeping the crowd updated on the slicing and smoking methods each chef was using. Alice Leavitt, journalist for Seven Days, WCAX and WVMT, David Cohen, food columnist for The Valley Reporter, and Tom Bivins, director for the Vermont Cheese Council, served as judges. 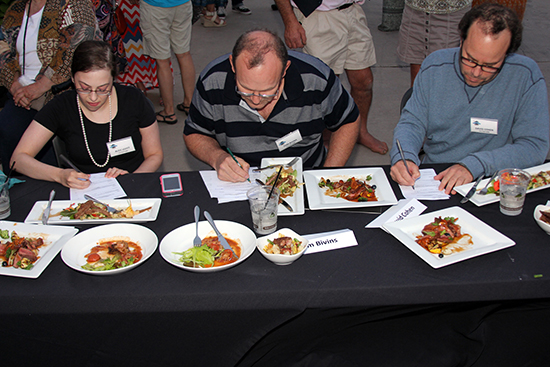 After trying the dishes and sharing their initial impressions with the crowd, Leavitt, Cohen and Bivins assigned scores to both chefs based on taste, plating and originality. When the final scores were tallied, The Common Man's 94 points just edged out Timbers' 88, effectively earning Longworth his first Iron Chef title and a special-made plaque, which will be displayed in the restaurant until next summer's competition.

In tasting Longworth's first dish, "The combination of the fruit and the onions and the tomato on top of the liver is amazing," Cohen said, and Leavitt agreed.

"I really like that additional sweetness," Leavitt said, and Bivins remarked that the dish was not overcooked.

While Bivins enjoyed the "nice summer flavor" of Dibkey's liver dish, which featured pan-fried pork over a tomato and green bean hash, Leavitt thought it was maybe a little heavy on the potatoes. 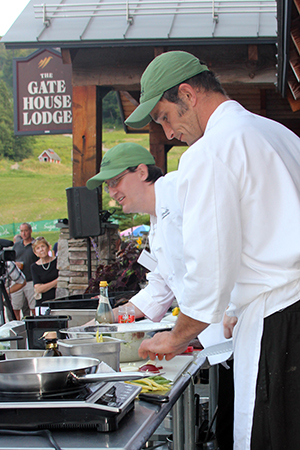 Dibkey's beef dish, a salad with apples and kohlrabi, earned compliments from the judges for its smoky flavor, and Leavitt said it had "a really great balance of sweet and tangy."

In the end, however, it was Longworth's self-described "relatively simple" beef dish that helped The Common Man come out on top.

Bivins praised the earthiness of Longworth's dish, which featured chanterelles and a sprinkle of blueberries and Cohen called it "incredible."

While Longworth and The Common Man came away with the plaque, all of the restaurants that participated in this year's Taste of The Valley had the chance to showcase their distinct culinary styles. And perhaps the biggest winners of the evening were the attendees, who—after polishing off countless tiny plates of wontons and fritters—left with full stomachs and a greater appreciation for the chefs, farms and food producers that make summer dining in The Valley so special. 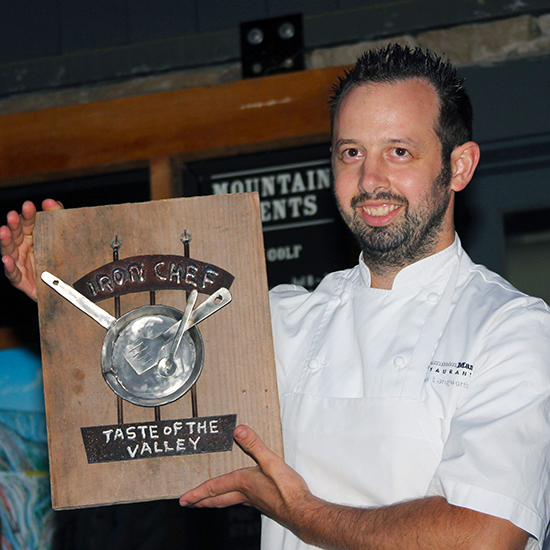