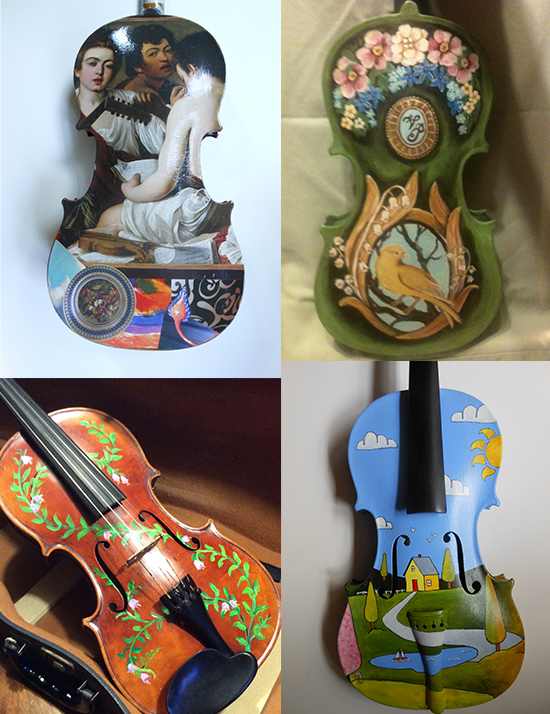 Several spots in The Valley will be hosting an unusual art display: painted violins. Nine artists have donated their talents on behalf of Vermont Philharmonic Orchestra, which is auctioning off the works of art this fall. The violins (and one cello) came from people's attics and storage sheds.

The artists, including several local artists, have created their own art with the instruments. They are all different: some quite charming, others dashing, while still others display a sense of humor and a play on the instrument itself. What they all have in common is their talent and remarkable creativity. Some of the artists are from the Mad River Valley and include those who are known through local art galleries: Gary Eckhart, Dotty Kyle, Sue Premore and Peggy Potter. Others are new to The Valley: Susie J. Gray and Linda Espinosa. And others are from Berlin (Lynn Spencer), Montpelier (Arthur Zorn) and Hardwick (Marie LaPre'-Grabon).

The Vermont Philharmonic (VP) is Vermont's oldest community orchestra, performing since 1959. Jon Borowicz was the first conductor, followed by Brian Webb, who held the baton for 20 years. Lou Kosma stepped up to the podium in 1999 and continues to lead the orchestra in new and exciting directions. Unlike the Vermont Symphony, the philharmonic is made up of volunteer musicians who come from all walks of life. The philharmonic also has an auditioned chorus directed by Lisa Jablow. Both the orchestra and chorus, made up of residents from all over the central Vermont area including the Mad River Valley, are committed to the twofold mission of sharing their love of music with audiences of all ages and encouraging young musicians to dedicate themselves to their musical education.

The violins will be displayed in several places in The Valley: Warren Public Library in September, at People's United Bank in Waitsfield in October, and Three Mountain Cafe in November. They can also be seen through the VP website, www.vermontphilharmonic.org, where there will be a link to the online auction. The auction will close in early December. Please take a look at these beautiful pieces and make a generous bid. All of the proceeds go to the orchestra.