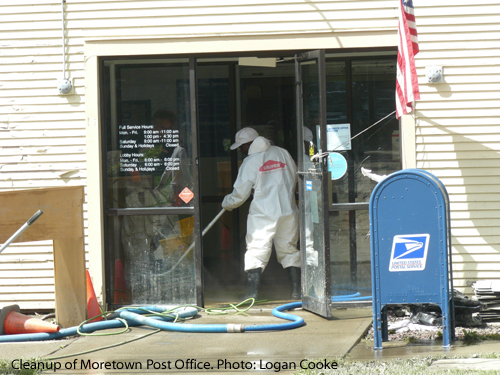 With construction plans for its new town offices under way, Moretown is moving forward with demolishing the old building.

At the Moretown Select Board meeting on Monday, November 3, the board agreed to accept a $19,000 buyout grant from the Federal Emergency Management Agency (FEMA) to demolish the old town offices, which were destroyed due to flooding from Tropical Storm Irene in August of 2011.

While Moretown has the old town offices assessed at $120,000, their fair market value came to only $64,000. Initially, Moretown Volunteer Fire Department had expressed interest in moving the building and using it as a training facility, but "there's a lot of red tape to move it ... versus demolishing it," town administrator Cheryl Brown told the board on Monday.

"If the fire department is interested in burning down the building for training, they're eligible to do that," Brown said, outlining acceptable forms of demolition as defined by FEMA, but the board did not see that as a viable option.

Where the old town offices stand between the church and the school, "we can't burn them down," select board member Reed Korrow said.

Instead, the select board agreed to move forward with plans to demolish the building, "unless [the fire department] has any real solutions" for moving it, Martin said. "But they'd really have to be compelling."

Because of the old town office's location behind the village sidewalks and in front of the site of the new town offices, which will be built where the Moretown Elementary School playground currently stands, the building has to be demolished before those two construction projects break ground, as the town is limited in the amount of soil it can disrupt at one time.

The select board plans to have the town road crew demolish the old town offices and will talk to foreman Martin Cameron as to when the crew can perform the work, which they expect will take only a few days. According to terms of the FEMA buyout, the federal agency will cover the cost of demolition.

As far as the building itself, it has been gutted and "everything's ready to go," Brown said.

Once the old town offices are gone, the site will be turned into a green space and Moretown has applied for a grant to create a memorial park commemorating those who volunteered their time to recovery efforts after Tropical Storm Irene, which affected many of the town's residents.