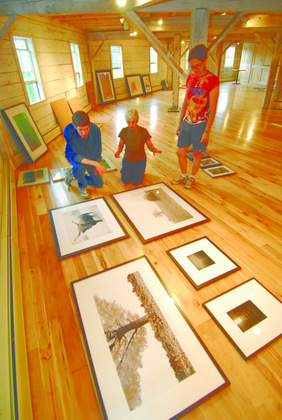 "This is the worst budget season we have ever seen," Washington West Supervisory Union (WWSU) superintendent Brigid Scheffert said at the start of the Harwood School Board meeting on Wednesday, January 21, before the board voted 16-14 to approve a budget up 5.22 percent from last year.

Dozens of students, teachers and community members came out last Wednesday to advocate for particular academic and extracurricular programs facing cuts, such as the school's science and world languages staff and its gymnastics team.

At the start of the meeting, Scheffert explained that, due to mandatory increases in areas like health insurance and salaries, if Harwood Union High School were to level-fund its budget for next year, it would increase by 7.4 percent. By making what Scheffert calls "reasonable cuts," the board was able to reduce that increase to 6.7 percent, but to reduce the budget from there, "we're at the place of programs," Scheffert said. "There's nobody in this room who wants to make a cut," she said, "but we're stuck in a situation."

According to Scheffert, a 6 percent increase in the school's budget for next year would, with Vermont's current education funding system, result in "very high, double-digit tax increases" at the town level. The state system is currently under review in Montpelier and could change in the future, Scheffert said, "but right now, we have to kind of fix the plane while we're flying."

This year, Harwood Union High School had 743 equalized pupils. Next year, it will have a projected 706. Facing declining enrollment, the board spent one of its past meetings "looking at every single course offering and how many students were in them," Scheffert said, and it considered restructuring classes and eliminating others.

As a result, the board's budget draft at the beginning of the meeting last Wednesday included the reduction of a 0.5 full-time equivalent (FTE) position in the school's world languages department that would result in Harwood no longer being able to offer Latin, the reduction of a 1.0 FTE science teacher that could hinder Harwood's commitment to its Science, Technology, Engineering and Math (STEM) program, and the elimination of the middle and high school gymnastics program.

With those cuts, the board brought next year's budget increase down to 5 percent, but members of the community felt the reduction was not worth it.

Coaches, athletes and parents spoke passionately about the value of the school's middle and high school gymnastics program, which helps students develop the strength and confidence to perform independently at competitions as well as a sense of community within their team. According to one former coach, "There's so many life lessons that are learned in the sport," she said. In addition, she brought up the Title Nine gender equality issue in withholding funding for a primarily female sport. In cutting the gymnastics program, "you're cutting opportunities for women," she said.

"It's not the academic classes that get kids out of bed in the morning," one teacher said in support of the gymnastics program and other extracurricular activities that allow students "to develop their whole being," she said, although the academic classes are important.

While the entire gymnastics team turned up for the meeting, so did many current and former students in the school's Latin department, which would not continue with the board's decision to bump a 0.5 FTE up to full-time but not refill the position that will be vacated by a 1.0 FTE who is retiring at the end of this year.

Harwood is one of few Vermont schools where students have the opportunity to take Latin and for that it is unique, one student said. Others spoke to the diverse subject matter of the class, which teaches students about word derivations and grammar as well as ancient history and culture. "Latin is less of a dead language and more a key to a society," one student said.

To all those who spoke passionately at last Wednesday's meeting, "this does mean a lot and you do make a difference," board vice chair David Goodman said, before the board started its deliberations, calculating how much adding the previously cut programs back into next year's budget would increase the bottom line. At $11,000, the gymnastics program would increase Harwood's budget by .08 percent, and at $72,000 each, the FTEs for world languages and science would up the school's budget each by 0.53 percent.

Ultimately, "We can't solve the state's problems by eliminating programs," Goodwin said, and the board voted 16-14 (with weighted votes) to add back the gymnastics program and the world languages and science staff, resulting in a 5.22 increase over last year's budget.

The added expenditures are partly offset by the board's decision last Wednesday not to fund one teacher's sabbatical – saving the school $35,000 – and its decision to reduce the school's contribution to its maintenance reserve fund by $50,000 for next year. Also included in a previous draft of the budget, Harwood will reduce the number of late buses transporting students home from after-school activities from one to two. With that change, co-principal Lisa Atwood explained, the school will look to time the one bus run so that it can accommodate the most students, and on the days when the school expects the bus to be full it can hire another overflow bus.

With the 5.22 percent increase, Harwood's cost per equalized pupil comes in somewhere between $16,673 and $16,772 and remains under the state's penalty threshold of $17,103, meaning the towns of Waterbury, Waterbury Center, Waitsfield, Warren, Fayston, Moretown and Duxbury will not have to pay a fine. But even still, the board recognized that the increase will not sit well with some taxpayers.

"We've only passed it in this room," Goodman said of next year's budget. "We haven't passed it in the community. ... We're asking a lot of our neighbors, and I think it's worth asking for," he said. "We need to stand up for our school."

"Our biggest problem is students," board member Susan MacLean Daley said, speaking to Harwood's declining enrollment, "and if we continue to cut programming we have no attraction to anyone coming in," she said. In the long run, "what is going to make us viable and sustainable is bringing people to this area," MacLean Daley said, and programs like Latin and gymnastics could help make The Valley and Waterbury an attractive area for families looking to raise children.

All in all, "I think it's time for us to recognize what the children in our community need to be successful in college and in their career, going forward," board chair Deb Hunter said, via conference call, "and I will work very hard to garner the support of voters."

Associated: >>WWSU to consider all options on school spending<<