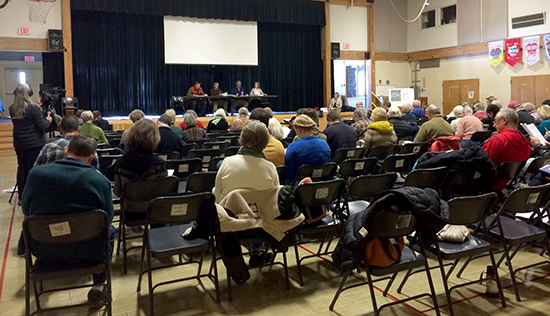 "As a friendly reminder, over 50 percent of the money we collect comes from people who don't live here and don't get to vote," Warren Select Board member Bob Ackland said at the start of Town Meeting on Tuesday, March 3, where about 100 people gathered in Warren Elementary School auditorium to vote on how their tax dollars are spent.

Speaking of taxes, "They're not coming in like they used to," town clerk and delinquent tax collector Reta Goss said, explaining that as of Town Meeting, residents still owed the town $329,000. "People can't afford to pay them," Goss said. "I'm also hearing that people who have their houses on the market are not paying," she said, and instead they are waiting to use the money from the sale.

That being said, residents approved via voice vote a budget of $3,059,794, including revenue, which marks a 2.92 percent increase from last year, as well as 13 other articles.

According to the select board, one of the biggest contributors to this year's budget increase is the Warren Volunteer Fire Department's allocation, which has gone up 36 percent from FY2014, from $74,630 to $101,630.

Last year, the town hired an independent consultant to evaluate the fire department, "and some things came back that needed some attention," Ackland said. As a result, the town is investing more money in vehicle maintenance and minor equipment replacements, "and if you want my personal opinion, it's just the beginning," Ackland said.

This year, the capital budget for the fire department has also increased by $160,000, select board chair Andy Cunningham said, explaining that the department needs to purchase new air packs to replace the ones they have now, which are 12 years old. "I wish we had seen this coming five years ago," Cunningham said, so the town could have spread out the cost, "but we didn't," he said.

When asked how many people the department would need to fight a fire at some of the larger developments at Sugarbush Resort, "None of the three fire departments have, typically, enough people to fight a fire like that," town resident Gene Bifano said, speaking of the three Valley towns. Instead, Bifano spoke to the importance of establishing "mutual aid" between towns. "It's a common practice throughout the state," he said.

Unlike the fire department, this year the highway department budget decreased 15.64 percent from FY2014, from $1,327,732 to $1,120,013. In that budget, the town is anticipating the price of salt to go up 25 percent. Even this winter, "Getting salt has been a challenge," Ackland said, "and it's something that we really need."

On Tuesday, the select board announced that five years ago it made a list of the poorest paved roads in town, and by the end of 2015, it will have taken care of everything on that list. This year the town has budgeted for paving projects on Brook Road, Lincoln Gap Road and Sugarbush Access Road, as well as gravel work on Fuller Hill Road and Plunkton Hill Road.

"This planning process has worked well for us," Ackland said of the five-year road maintenance plan. "We're pretty happy that we've been able to achieve this work." When one resident asked about the quickly deteriorating condition of Brook Road, which the town did work on just a few years ago, Ackland explained that the town had been experimenting with a low-cost paving option that, indeed, "hasn't held up well," he said. But that's the only road they've used it on, "and it was worthy of looking into."

After a few brief discussions on the town garage's new propane heater and the price of heating with oil and gas, residents voted to approve the budget.

Article 4, asking residents to vote its current taxes into the hands of the town treasurer, passed without much discussion, as did Article 5, where taxpayers voted to allocate $10,000 from the Conservation Reserve Fund to be used for land conservation projects this year, such as a townwide wildlife study.

Article 6, asking residents to authorize the select board to apply for a loan not to exceed $259,000 from the Drinking Water State Revolving Fund to construct a new municipal water system that will serve the Town Hall, the municipal building, Warren United Church and the Warren Volunteer Fire Station, required some explanation.

The town plans to use the money to drill a new well on a small piece of town-owned land located across the street from the Town Hall. The water in the current system is nonpotable, as its well is located beneath the municipal parking lot and is contaminated by runoff.

"And it's not just that it's bad water," Cunningham said. "Sometimes it's no water," he said, explaining that the current system has dried up on several occasions, "and we're wasting money on replacing pumps that fail because they burn out."

Unfortunately, because the new well will serve multiple buildings, "There's a whole bunch of different hoops that you end up going through" in order to meet state standards, Cunningham said, and so the $259,000 cost estimate is a "ballooned number." Nevertheless, residents voted to approve the article.

Article 7 asked residents to approve spending $75,000 to repave the Warren Elementary School parking lots, fire lanes and handicapped entrances. The project was not included in the five-year road maintenance plan, but the select board felt it needed to be done because plowing those areas is becoming increasingly difficult.

"It's no question this has to be done," one resident said, "so why wasn't it in the budget?"

In response, Cunningham explained that the school repaving project was brought to the board's attention after the highway department's allocation for next year had already been outlined, and "We try not to load the budget too much, because then people have a bigger shock when they see [it]," Cunningham said.

"My personal feeling is that things that are unusual should be highlighted," Town Meeting moderator Bob Messner said of the school repaving project and in the end residents voted unanimously to approve the article.

Up next, Article 8, in which Goss moved to set the payment dates for taxes, passed without discussion.

Article 10, asking voters to authorize the select board to accept land donations or purchase land within the town, passed without discussion, bringing the meeting to Article 11.

"Shall the town vote to start next year's Town Meeting at 8 o'clock in the forenoon?" the article asked, bringing up the debate over how to increase voter participation.

"What's the latest in terms of towns moving to evening meetings?" one resident asked.

"I have heard of various towns trying to be creative, and I don't feel like they've gotten anywhere with it," Cunningham responded. "My personal feeling is that if someone wants to be there, then they are, mostly."

Indeed, "People will come to Town Meeting if they think it matters to them," another resident said, and the article passed.

"I think that each year we should devise some very controversial issue and publicize it highly, and that's how we'll get people to come," Warren Energy Committee co-chair Dotty Kyle joked. So stay tuned, until Town Meeting 2016.

After a break for lunch, about 50 Waitsfield voters returned to vote on the school budget and hear a presentation about the school from Waitsfield Elementary School principal Kaiya Korb. Korb explained the school's philosophy and the student performance matrixes. She told those present that 90 percent of school staff have a master's degree or higher. She also told those present that the school's PTA provides between 1 and 2 percent of the school's funding.
Town resident Deri Meier asked school board chair Rob Williams about consolidating local schools. Williams said yes, and added, "The funding mechanism for education is broken and consolidation is not the fix."
By a voice vote, voters approved a budget of $2,433,540, up 1.9 percent, with staff reduced by one full-time teacher and preschool spending increased.