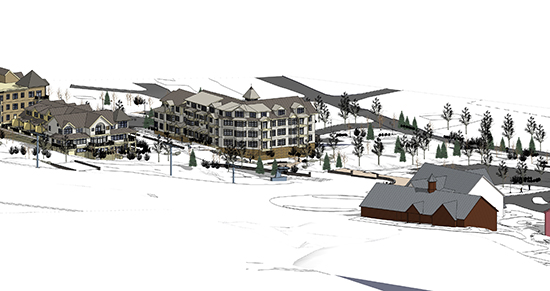 Confronted with future development on the mountain, the Warren Volunteer Fire Department and Sugarbush Resort have been learning to work together.

On Tuesday, April 14, the Warren Select Board signed off on two Memorandums of Understanding (MOU) for the resort's Gadd Brook Residences. One outlined the specific permit conditions for the building's construction and the other planning for future fire safety.

"I think we're there," Sugarbush director of planning and regulatory compliance Margo Wade told the board in presenting the MOUs, which were revised over the course of several weeks and several conversations between the resort, the fire department and the town.

Gadd Brook Residences is a 16-unit full-ownership condominium complex with a mix of two-, three- and four-bedroom units located at the base of Sugarbush Resort. The 40,000-square-foot building would have four stories and an underground parking garage. It is one of six mixed-use buildings that comprise the Lincoln Peak Base Area Redevelopment Phase II Master Plan, which if completed would add approximately 93 residential units to the bottom of the mountain.

Wade first presented the plan for Gadd Brook Residences to the Warren Development Review Board (DRB) at a public hearing in February, at which several members of the Warren Volunteer Fire Department voiced their concerns about the building's size and accessibility in case of an emergency.

To be able to fight a fire in a multi-unit, multi-story complex like Gadd Brook Residences, "We don't really know for sure what we need yet," Warren Volunteer Fire Department chief Pete DeFreest said, explaining that the department lacked volunteers, up-to-date equipment and modernized facilities.

Coming out of the public hearing, the DRB "asked us to work it out" with the fire department, Wade told the select board last month, before they could approve Sugarbush's permit application for Gadd Brook Residences. The approval of Sugarbush's permit application to Vermont's Act 250 Commission for the project was also dependent on finding a solution that meets the requirements of both the resort and the town.

Since then, representatives from Sugarbush, the fire department and the select board have been meeting in order "to get everyone's concerns on the table and taken care of," select board chair Andy Cunningham said last Tuesday. "We've worked our way through a lot of the little pieces and it went pretty well," he said.

Those "little pieces" include alterations to the design of Gadd Brook Residences and its surrounding land. According to the MOU outlining specific permit conditions, Sugarbush will modify the building plan so that the fire department will have direct access from the exterior of Gadd Brook Residences to the mechanical room and the fire alarm control panel will be relocated to the building's lobby.

According to the MOU, Sugarbush will also modify the site plan to include a fire lane along the east side of the building's parking lot to allow the fire department access to the southeast corner of the building and the resort plans to add a dry line to extend the existing snowmaking system to a location in close proximity with Gadd Brook Residences.

Before starting construction on Gadd Brook Residences, the MOU states that Sugarbush will update its Emergency Action Plan so that it includes two fully trained responders and keyholders to provide on-call coverage of the building. Those responders will have in-depth knowledge of all of the building's mechanical systems including alarms, sprinklers, elevators and gas systems and will train with the Warren Volunteer Fire Department.

In the last section of the MOU, titled "Consultant Funding, Education and Good Faith," Sugarbush commits to funding up to $5,000 for the Warren Volunteer Fire Department to hire a qualified consultant to help "in its developing a holistic understanding of large-scale commercial development and its impacts on the [department], including equipment, apparatus, water supply, training levels, membership levels and how to better partner with Sugarbush."

The second MOU to come out of the permit process for Gadd Brook Residences deals not just with a specific condominium complex but with planning for future fire safety surrounding the resort as a whole. It states that, moving forward, the town will consider the acquisition of a platform fire suppression truck to replace the department's ladder truck.

"Sugarbush and the town agree that a platform truck is a safer vehicle to address fire events and has broad application throughout the town and adjoining communities," the MOU states. "Sugarbush and the town agree this kind of specialty equipment provides a better level of service to resort-owned and operated facilities." The platform truck would be planned, approved and financed through Warren's Capital Budget program within the next five years.

Due to its height and length, however, a platform truck would not fit into the fire department's two-bay station near Sugarbush Village. According to the MOU, the town said it will consider upgrading and even relocating the station and Sugarbush agreed to be a part of that discussion.

Lastly, the MOU states that Sugarbush plans to organize, run and manage a fire safety fundraiser that can support the purchase of the platform truck and the possible upgrade of the fire station at the resort.

Before signing the documents, Cunningham spoke to the process of working with Sugarbush and the Warren Volunteer Fire Department to come to an agreement that would allow for the safe construction of Gadd Brook Residences and other large-scale development. "I think we've built up a lot of good will and trust over the last week or two," Cunningham said. "But it's not done." Moving forward, "Everyone one has to kind of keep their eyes on [this] and be willing to come to the table," he said.