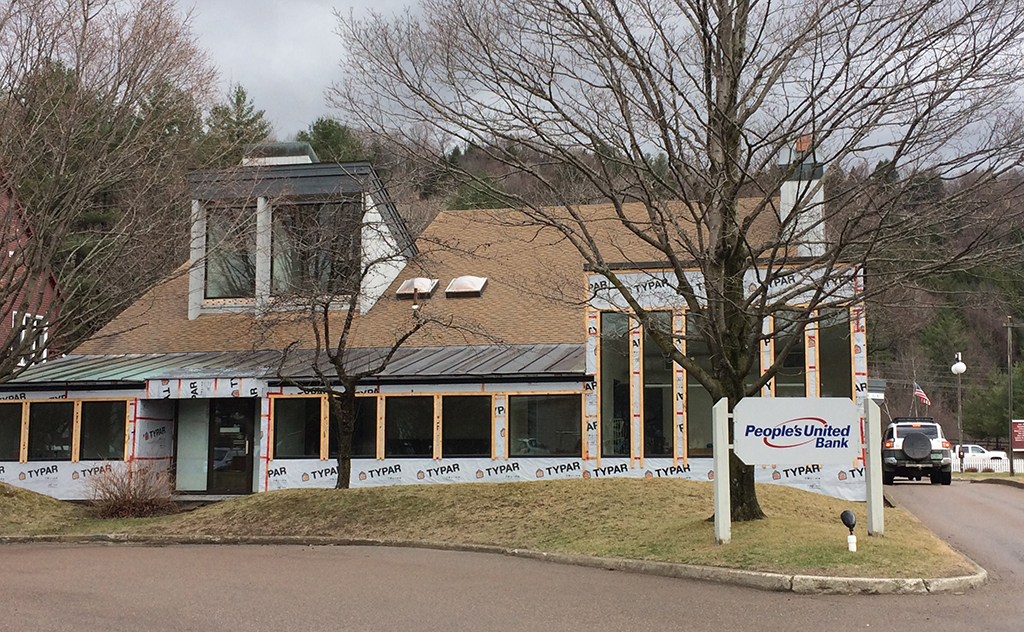 After a petition appeared around town calling for Waitsfield to stop working on building a new town office and instead purchase the People's United Bank building, Front Porch Forum went wild with comments about the idea.

The petition was created by Neil Johnson of Waitsfield. It calls for the town to "pause all actions toward building a new town hall."

"The People's United Bank property that is coming on the market would be worth considering. This property could probably save our budget $700,000. This will save our tax payers [sic] hundreds of thousands of dollars and help keep our Valley looking and being vibrant. All the needs for the town office are in this building," the rest of the survey reads.

People's United Bank announced its intention of closing the Waitsfield branch at Mad River Green Shops two weeks ago. The bank owns the building and the town has it appraised at $714,600. It already has a vault and it is approximately 3,300 square feet. It features the main lobby, a full kitchen, four private offices, a conference room, the vault, two handicap-accessible bathrooms and upstairs storage space. While the bank owns the building, it pays maintenance fees to Crosspoint Associates, owners of the shopping center. The bank plans to move out in early July.

Waitsfield is almost two years into the process of building a new town office on a parcel of land at the north end of the village known as the Farm Stand site. On July 30, 2013, voters approved a bond vote allowing the town to spend up to $650,000 to construct a new town office, adding that money to a $750,000 Community Development Block Grant that the town received plus a donation of $100,000 for the land.

That vote came after voters initially turned down a request to bond for up to $1.6 million to build a town office on that parcel, before the town received the grant and the donation and scaled down the project.

The town put the project out to bid this spring and all the bids came in higher than the engineers and architects estimated before pricing the additions and alternatives that could add another $235,285 to the project costs. The base bid from the lowest bidder was $1.25 million and the town had already spent about $150,000 on the project in architectural, engineering and permitting costs.

The town's plan to address what is a budgetary shortfall of about $180,000 is to apply for $225,000 more in grant funding. If the town receives more grant money, the project would continue. It is does not receive additional monies, the project will get scaled back. The fact that the town needs additional monies has irked some residents who have taken to social media to object to what they see as excessive spending.

When voters cast ballots on the town office the second time in 2013, the town estimated that it would need about $350,000 to $450,000 from taxpayers, but made the bond amount $650,000 to allow for overages and other contingencies.

Now, back to the question of whether Johnson's petition can arrest the process that the town is already pursuing. Because petitions calling for revotes or rescissions of votes must be filed within 30 days of the original vote, it's too late to make it binding that way.

For the select board to heed the demand of the petition, a new vote would have to be held and the town would have to surrender the initial $750,000 grant and reapply for a new grant. Town administrator Valerie Capels said it would set the project back by at least a year, maybe two.

"We'd need to look at all of the costs associated with this new proposal, including acquisition, new design and cost estimating services, permitting, interior adaptation (rearranging walls to increase meeting space), retrofitting the vault (out with drawers and in with shelving), monthly association fees, lost tax revenue, new bond vote, etc. We would need to forfeit the Community Development Block Grant, reapply and go through the environmental review process again," Capels explained.

"I think that train has already left the station at this junction. The voters said proceed, get bids and build it. We've got our marching papers," said Waitsfield Select Board chair Paul Hartshorn.

Yes, the bids came in higher than the funds we have. We can't accept a bid that is for more money than we have. If we have to cut the building, we will," he added.

"We're committed by the voters now and probably legally. I'd question whether we can pause. If we fool around too long we're going to lose the grant. I've got some major concerns about this. I just wish the bank had come on the market a year ago instead of now," he added.

The select board meets next on April 27 and expects to receive the petition as well as hear comments from the public.

At that meeting the board will be working on the final details of its grant application for supplement funds. That application is due by May 7 and the town will know by mid-May whether more funds are forthcoming. The town has until the end of May to accept or reject the bids it has received for the town office.

Both Waitsfield and Moretown received the grants to help them move their town office out of the flood plain in the aftermath of Tropical Storm Irene. See related story about Moretown's progress on rebuilding the town's town office.