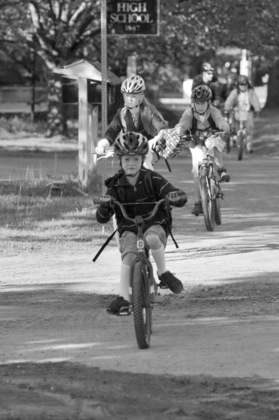 The select board this week met with consultant Jody Carriere of Lamoureax and Dickinson to hear results of a preliminary study on the feasibility of creating a sidewalk on the west side of Route 100 through Waitsfield Village.

This project is completely separate from the sidewalk slated for the east side of Route 100 that will run from the Waitsfield Elementary School south to Bragg Hill. That project has been underway for almost two decades and goes out to bid this fall for construction next summer.  And Route 100 from Waitsfield to Warren is also slated for repaving next summer, although the Waitsfield Village and Irasville portion won’t be repaved until the east side sidewalk is done.

The sidewalk for the west side of Route 100 is in the planning and conceptual stages. The $15,000 feasibility study grant came from the Central Vermont Regional Planning Commission. That sidewalk would begin at the intersection of Old County Road and run south through Waitsfield Village until Farr Lane.

Business owners and other property owners on the west side of Route 100 weighed in on the various options before the select board opted to pursue a plan with more flexibility in terms of sidewalk width, on-street parking and green strips. Concurrent with a west side sidewalk project, the town will pursue upgrading the drainage on that side of the road as well.