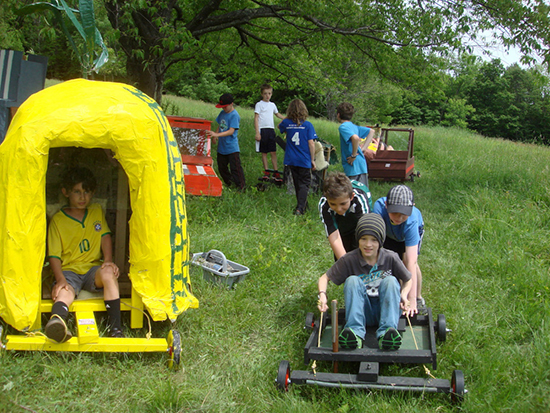 On Sunday, June 7, soap box cars in the shapes of turtles, pineapples and hot dogs lumbered down the hill at Knoll Farm in Fayston.

Local children met for three hours after school every week for six weeks to build the soap box cars in a workshop led by Knoll Farm teacher Eddie Merma. They worked with wood, wire, papier-mâché and reclaimed materials to each create their own wheeled structure, which they tested out in front of friends and family last weekend.

Merma studied sculpture in college in Chicago and earned his degree in art. Upon graduating, he spent three years working as a social worker helping impoverished youth in the city’s south side, but he moved to Vermont because “I needed a break,” he said. “I was looking for a little cleaner air to breathe.”

Merma farmed on Bragg Hill Road last summer, but he missed working with kids and so he started coming up with ideas for hands-on classes he could hold on the property.

“I’d never built a car before myself,” Merma said of the soap box workshop, “so I was kind of learning as I was going,” he said. He researched the basic frame of the car and how it would function and with the help of two friends he offered guidance and tips to the children throughout the building process.

“At first I was a little worried, because the project was three hours long, that they would get bored,” Merma said of the weekly classes, “but they were still working up until the end each day,” he said. “Each kid had a vision of what they were going to do from the beginning and there was no detaching them from it.”

In Merma’s soap box car workshop—the third he’s held in The Valley—each kid created something “really unique,” he said of the different cars, “and they really took ownership over it.”

On Sunday, the kids worked together to push the soap box cars to the top of a big hill overlooking The Valley and then watched them drive down a path that had been mowed in the grass.

“A couple of them made it down no problem,” Merma said of the soap box cars. “A couple of them needed a little bit of help,” he said. The wooden structures were “kind of rickety” on the uneven surface, Merma said. “I think the wheels were just big enough.”

In July and August, Merma is leading a summer camp at Knoll Farm in which he plans to focus on a different hands-on building project each day, such as screen printing and boat building. Already, some of the same children who participated in his first workshop on sculpture making continued on to do the soap box workshop and watching their growth was really rewarding, Merma said. “There were kids who had never picked up drills before … and this year they’re leaders,” he said of the children in his most recent class.

“I want to keep working with these kids,” Merma said, and in the future he’d love to hold a workshop that uses 100 percent recycled wood. In addition to potential students, “There’s so much material in The Valley,” Merma said. “There’s so many people who are builders … or retired woodworkers who will clean out their shops for you,” he said. “It’s really inspiring to be in this community.”

For photos and more information about Merma’s soap box car workshop, visit eddiesworkshops.com. For information about the summer camp and future workshops for kids, contact Merma at This email address is being protected from spambots. You need JavaScript enabled to view it. or call (630) 269-0143.