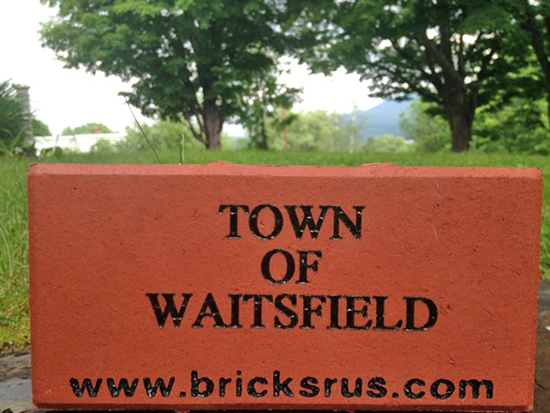 Waitsfield residents who want to beautify Bridge Street by selling enough bricks to create a border for the sidewalk have presold 315 bricks as of press time on June 10.

The organizers of the Bricks for Bridge Street campaign will come before the Waitsfield Select Board next week on June 15 and hope to receive select board permission to continue with their project.

Organizers AnneMarie DeFreest and Barbra Gulisano came before the board at a June 1 meeting after learning that plans for the sidewalks on Bridge Street (currently undergoing a major construction project that includes work on the covered bridge, its abutments, the stormwater system, repaving the street and rebuilding the sidewalks) included pouring solid concrete sidewalks and leaving an existing brick sidewalk in front of Peasant restaurant.

What they wanted to know was whether it would be possible to upgrade the project to include a brick border and possibly street lamps, if organizers could raise the funds. Since that time they have reached out to other communities where similar borders are found and gotten contact information for engraved brick manufacturers.

DeFreest roamed the Waitsfield Farmers’ Market last weekend, signing up people to purchase the commemorative bricks. She also attended the weekly meeting of the Mad River Valley Rotary Club this week to explain her efforts and presell more bricks.

The work on Bridge Street (which has the covered bridge closed through mid-September, except for the day of the Mad Marathon on July 12) also includes laying conduit for streetlamps but not stubbing them in or installing bases or lamps.

“This made no sense. This indicated that the sidewalks would need to be busted up again to place lamp stub-ups in the future,” DeFreest said.

She and Gulisano have done extensive research and are going to come to the select board next week with a proposal to revise the current plans for Bridge Street so that the sidewalk would be enhanced with the bricks from the pocket park to Route 100 and on the opposite side of the street from the covered bridge to Route 100. They will also propose stub-ups for historic streetlamp posts.

“Studies show the addition of lighting can decrease potential loitering and vandalism. Last week the state police had to be called because kids were tearing wood off the bridge and throwing both the wood and concrete blocks into the river. The kids ignored the No Trespassing signs,” DeFreest said.

What she and Gulisano are proposing would require about 5,500 plain bricks and they plan to sell between 800 and 900 of the engraved bricks. They are purchasing the engraved bricks for $18 and until next Monday are selling them for $40. The price goes up $10 after that.

If they sell that many bricks they will be able to purchase the plain bricks needed as well as fund the approximately $10,000 needed to install wiring and stub-ups for the streetlights and the materials needed to lay the bricks. If they raise additional funds, they will put those funds toward the purchase of streetlights.

They have asked the town for and received permission to use the old decking that is being pulled off the covered bridge to build benches to be placed along the Mad River. They will sell benches and install plaques on them as another funding source to be used for the streetlights and for trash receptacles. They hope to build between 10 and 14 benches.

The select board will hear their proposal as well as receive an update on the number of engraved brick purchases people have pledged to buy at their June 15 meeting. DeFreest will be at the Waitsfield Farmers’ Market seeking brick pledges this weekend as well. Those interested can email her at This email address is being protected from spambots. You need JavaScript enabled to view it..