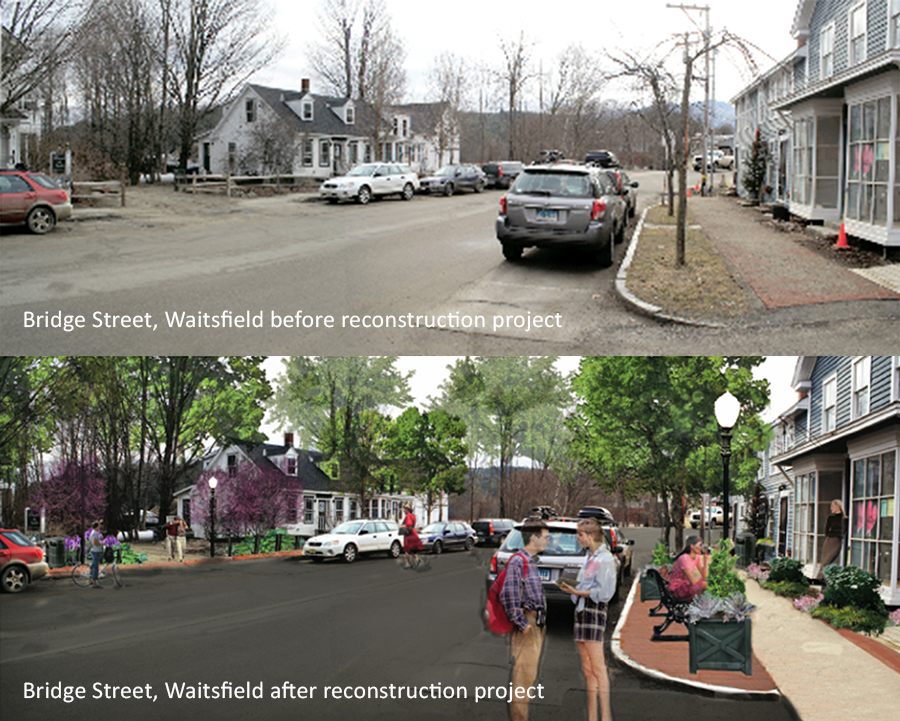 The Waitsfield Select Board gave its approval to a citizen-led Bridge Street beautification project that will raise funds for and install engraved and plain brick pavers as accents to the concrete sidewalks on Bridge Street and also install the conduit and wiring necessary to install eight streetlamps on the street. The citizens are also hoping to raise enough funds to purchase the streetlamps as well.

At the June 15 meeting of the select board, residents AnneMarie DeFreest and Barbra Gulisano showed and discussed a PowerPoint presentation detailing their work so far and how they expect the finances to work. They have presold 467 engraved bricks and will sell no more than 1,000 of the bricks, realizing a new profit of $24,800.

They are also using reclaimed materials from the covered bridge repair project to make benches for Bridge Street and will sell commemorative plaques on those, raising another $3,000. They anticipate about $2,000 from community organizations, for a total of $29,800.

That sum will pay for the cost of the engraved and plain bricks, the concrete, sonatubes and conduit and leave them just $5,000 short of being able to pay for all of the streetlamps (projected to cost $22,000). DeFreest and Gulisano told the select board that they are hopeful they will be able to raise the additional funds.

They asked the board to be on the hook for the $5,000 if they should come up short, but the board demurred, given the already anticipated cost overruns on the Bridge Street project. Board members said they would prefer to get everything ready for the streetlights and have the volunteers pay for as many lights as they can and then ask voters to approve the balance of the funds at Town Meeting next year.

"We know it's important to put bases in now and the bricks go along with the sidewalk to complete the project. Is there any reason we couldn't do all of this work and look to do the lights after Town Meeting next year when we have voter approval to spend this money?" board member Scott Kingsbury asked.

DeFreest pointed out that the current work includes no ground work to install the streetlamps in the future and said that this would cost the town an additional $40,000 when the town actually went ahead with installing the lights because the concrete would need to be ripped up around each light base. Doing the work now would save the town that money in the future, she said.

She also pointed out that the new streetlamps will cost $4 a month to operate and noted that the town is already paying $20 apiece for two streetlights on Bridge Street. She suggested that the difference in those two costs be put in a savings fund to maintain the lamps.

The select board motion approving their project included wording that spells out how they need to stake off the area where they are laying bricks for safety reasons and also included language that spelled out that their project would include all the work leading up to the purchase of the lights. If they raise enough money, the organizers will be back before the board seeking permission to install the lights.

The organizers have volunteers laying the bricks, doing the electrical work and building the benches. DeFreest told the board that 40 percent of the people pledging to buy the engraved bricks were Waitsfield residents, indicating communitywide support for their efforts to beautify Bridge Street while it undergoes a summer's worth of work, including a new stormwater drainage system, work on the covered bridge and new paving and sidewalks.

The board discussed and town administrator Valerie Capels confirmed the following day that it will be possible for the Bridge Street beautification organizers to funnel their donations through the town to avoid paying sales taxes and so that the contributions are considered charitable contributions. That means that people buying bricks and plaques for benches will pay the town and the town will purchase the items on their behalf.