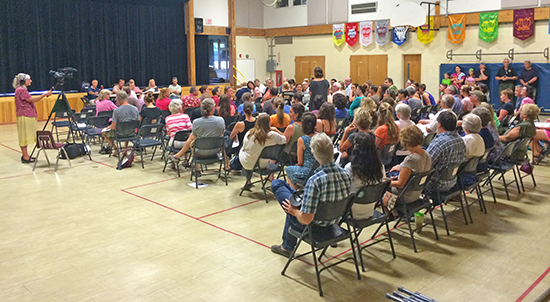 At a Warren School Board meeting that took place on Tuesday, July 7, over 100 community members came out to question the actions of the elected officials, who, in addition to asking for the resignation of administrative assistant Laurie Jones, also hired former board member Laurie Greenberg to teach third and fourth grade.

Those actions "have raised questions in our community about intentions and procedures," school board member Adam Greshin read from a prepared statement at the start of the meeting. After receiving questions about the hiring process for the new intermediate unit teacher, the board sought to explain themselves.

"We used the same process we always use," Greshin said. "We formed a hiring committee comprised of teachers, an administrator and a school board member," he said. After receiving over 40 applications, choosing finalists, conducting interviews and checking references, "the committee was unwilling to make an offer to this first round of candidates," Greshin said.

And so, the hiring committee opened a new search, at which time Greenberg, who was currently on the board, resigned so that she could apply for the teaching job. "The same committee and the same process was used to review her application," Greshin said. "She became the choice of the majority of committee members. Her experience as a teacher, her references and her interview made her the clear favorite. We are excited to have her on board."

But some members of the community have questioned the integrity of the hiring process, given that Greenberg sat on the board while the board was formulating its hiring strategy and during the first round of interviews. {jcomments on}