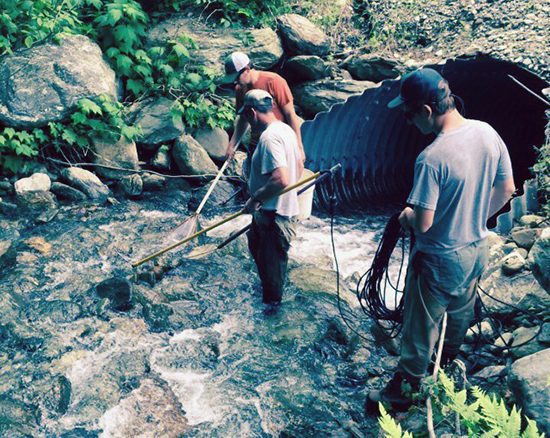 A trio of state employees parked their truck on the side of German Flats Road near Slide Brook and unloaded a portable generator, an electric loop, nets and a five-gallon bucket. The trio was preparing to check the health of the wild trout population in The Valley's smaller streams on July 9.

Bret Ladago, fishery biologist, and Tim Appleton, fish and wildlife specialist, along with Scott Yaros, an environmental assistant, were clad in waders and boots as they prepared their equipment.

They started the generator and plugged the electrified loop into hundreds of yards of extension cords with the loop grounded against the culvert. While Yaros spooled out the extension cord, Ladago and Appleton waded up the stream with Appleton running the wand through the shallow water, temporarily shocking the fish with 250 to 500 volts of DC power. Ladago worked alongside him, both with nets to scoop the shocked and immobile fish into the five-gallon bucket. In addition to temporarily shocking the fish, the current also temporarily immobilizes all macro creatures in the water.

They worked their way about 40 to 50 yards up the stream, collecting and assessing the brook trout population and its health and size. The fish they were monitoring are the fish native to the stream, not the ones that are stocked. The first one they found was about an inch and a half long. The fish were returned to the water when they completed their trek upstream.

They use the assessment to determine whether proper environmental practices are taking place upstream in the headwaters. They assess Slide Brook as well as Chase Brook and Clay Brook with sites above and below the locations where water is withdrawn for the resort's drinking water system and for snowmaking at Mount Ellen. They work out of the Roxbury fish hatchery offices. {jcomments on}