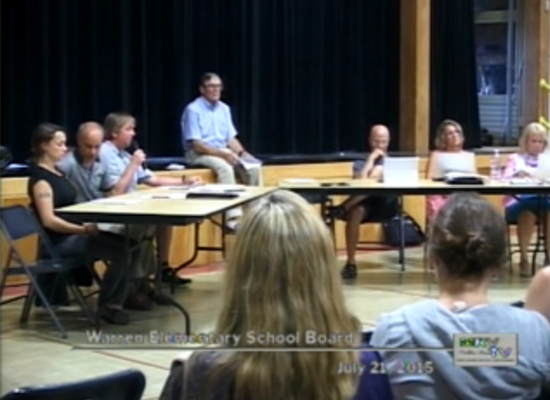 After the Warren School Board decided not to renew the contract of longtime administrative assistant Laurie Jones last month, those left devastated by the decision have proposed a way to bring her back.

At the board meeting on Tuesday, July 21, Warren resident Beth Schoellkopf presented a proposal to create a new position within the school – coordinator of student events and services, which Jones would fill.

"The community values certain responsibilities and roles that the administrative assistant had," Schoellkopf said, explaining that the new position is based on "what we think Laurie has contributed and what we feel is really needed," she said of Jones, who had worked behind the front desk at Warren School for 27 years.

"There's a large group of people who are willing to raise the money" to pay for the new position, Schoellkopf said, suggesting that it could fall under the jurisdiction of the Warren Parent Teacher Organization (PTO) or the Warren After School Program (WASP).

At the beginning of the meeting, board chair Mike Ketchel announced that on July 16, the board hired Heidi Greene, a former instructional assistant at the school, to fill the administrative assistant position previously held by Jones after Ketchel and board members Rob Rosen and Adam Greshin voted for the nonrenewal of her employee contract on June 19. The fourth school board member, Matt Staples, voted against the nonrenewal.

Jones accepted the board's separation agreement on Thursday, July 2, which included "a very healthy benefit," Ketchel told the public at the last board meeting on July 7.That benefit package includes half of one year of Jones' $43,000 salary paid over two years plus one month of health care coverage. As for the reasons for letting Jones go, due to privacy policies regarding personnel issues, the board continued to keep quiet.

"I think I have a very good understanding of why we are all here," Washington West Supervisory Union (WWSU) superintendent Brigid Scheffert Nease said last Tuesday, but "going forward, even a group of passionate, well-intentioned people don't have the right to know about employee things," she said.

In attempts to set straight some stories that Scheffert Nease had read on the online networking website Front Porch Forum saying that she was responsible for the nonrenewal of Jones' employee contract, every hiring decision is "collaborative," she said. "My role is to work with the board."

Scheffert Nease thanked Schoellkopf for the proposal to create a new position, explaining that anything that could bridge the gap between the community and the board "has merit," she said. "You have my word that I will give it serious study."

The other board members said they too would look into the proposal. "That's what we do in these meetings," Greshin said.

IN NEED OF LEADERSHIP

"Can you have a serious discussion about this and deliberate and make a decision without an active principal?" Schoellkopf asked, calling into question Warren School principal Jill Ballou's absence last Tuesday as well as at the board's previous meeting. "I don't think we even know we have a principal," Schoellkopf said.

According to Ketchel, the board had told Ballou back in February that they usually only have one meeting in July, and so she had planned for a "family vacation" for that week. Ballou will be back in the office and resume her full responsibilities by Monday or Tuesday, July 27 or 28, Scheffert Nease said.

In looking into Schoellkopf's proposal to create a new position, "I have to, first of all, make sure it's even legal," Scheffert Nease said. The proposed coordinator of student events and services would have to be an employee of the school, but perhaps her salary could be paid for via a donation to the school, Scheffert Nease speculated.

"We have the power to create a paid position in the budget," Ketchel said of the board, but he explained that the budget for the coming school year has already been set. And as for the question of how to pay an added employee salary, "When Act 60 came out, it said you cannot pay someone to do a school function with locally raised funds."

As a public institution, Warren School has to comply with state and federal laws and that's something it's been struggling with in recent years, Scheffert Nease said. "Warren School is out of compliance with a number of them that have serious ramifications," she said.

In addition to recently being made aware of a PTO checking account that was incorrectly linked to the school's federal tax identification number, the school has had issues submitting average daily attendance numbers to the state – which affects the amount of funding it receives. It almost lost thousands of dollars towards subsidized lunches for failing to keep the correct records, its afterschool program operated for years without insurance and its playground has safety issues, Scheffert Nease said, to name a few.

"The school has a lot of work to do," Scheffert Nease said. She would not say whether any of these issues of compliance were in any way related to Jones or the administrative assistant's job.

"It was great to hear some of the issues of the school," Warren resident Kinney Perot said. "I don't know what they have to do with not rehiring Laurie."

While Perot praised Schoellkopf's proposal to create a new position for Jones, does it "clear the air? Does it take care of the healing?" she asked. "Perceptions of fairness are important in this school," Perot said, speaking to the community's current lack of trust in the board. "This whole situation just makes me so incredibly sad."

Many members of the public were aware that the school has been affected and will continue to be affected by new laws from the state and federal government, but they expressed dissatisfaction in the way the board has negotiated some of these changes – specifically with the nonrenewal of Jones' contract.

"This is a time to make sure that when the new things are coming we don't let go of what we value," one resident said.

"If you don't bring Laurie back you are going to tear the heart out of this community," another resident echoed.

Moving forward, "There is a proposal put forth that seems to make a lot of sense – to bring a woman back into a school where she is beloved and serves great purpose," another resident said. {jcomments on}