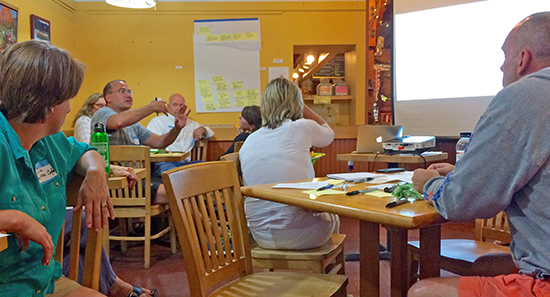 What are the strengths of the retail sector in The Valley? What challenges does it face?

Over a dozen local business owners came together at Three Mountain Cafe in Waitsfield last Thursday, July 23, to participate in an economic vitality workshop – the second in a series of 10 that will take place this summer.

Last Thursday, MRVPD executive director Joshua Schwartz gave a brief overview of the study, which aims to create a baseline for local policy and decision-making, moving forward. Put simply, The Valley's economy is very different today than it was 50 years ago, Schwartz explained, "and we have every reason to believe it will be different in the future," he said. 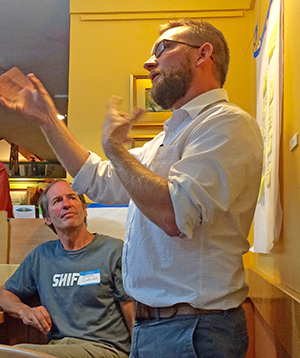 In looking at tax receipts from local businesses over the past few years, The Valley's retail sector "is not necessarily following the trend of the state," Schwartz said. Indeed, throughout the workshop, business owners identified challenges that are unique to the region and strategized ways to capitalize on what makes The Valley different from the rest of Vermont.

Passing out poster-size pieces of paper and sticky notes, workshop volunteer facilitator Patricia Floyd asked for workshop attendees to divide into groups, where they made a list of what they thought were the strengths of local stores.

The local retail sector, according to most groups, specializes in offering local, high-quality products that customers cannot find anywhere else. Those products display a connection to the land and are sometimes sold by the same person who made them – or someone who knows them. That's another strength of The Valley's retail sector, business owners said.

When tasked with identifying the challenges facing local stores, workshop attendees agreed that seasonality and geographical connectivity within The Valley were the main sources of strife for the retail sector.

The Valley's economy is tied to skiing and because of that it's highly variable, business owners agreed. Retail stores must cater to tourists during peak seasons and locals in the off-season and it's hard to do both, many workshop attendees agreed. Stores can't stay open late enough for out-of-state skiers who drive up from New Jersey and arrive in town at 10 p.m., and they can't offer core products for people who live here year-round.

"Where can you go to buy underwear in The Valley?" one business owner asked.

To help curb the fluctuations in customers between snowy months and non-snowy months, The Valley could work on attracting more year-round, indoor facilities that would draw customers in regardless of weather, workshop attendees said.

Given the state's burgeoning beer industry, a brewery would be an obvious choice, "but we'd need to develop the infrastructure," one business owner said, speaking to Waitsfield's lack of a municipal wastewater system. As an example of another indoor facility that would draw people to The Valley year-round, someone suggested putting a roof over Skatium so that it could host ice hockey games and tournaments.

And while a lot of the focus was drawing more customers to The Valley, they shouldn't all be from out of state, workshop attendees agreed, speaking to the opportunity to host events that will attract people within a 50-mile radius, "because they're the ones that are here during mud season," one business owner said.

Regardless of whether they're from 30 miles away or 300 miles away, The Valley is not laid out well for visitors, workshop attendees said last Thursday.

For tourists looking to shop locally, it's not always clear where they should go. Stores in Waitsfield are divided up between the village and Irasville, which is confusing and inconvenient, and stores in Warren – located just a few miles south on Route 100 – often seem too far away for visitors.

The Valley lacks geographical connectivity within its retail community, business owners said. "There's not one place you can go to and walk around and shop," one said, and the area's few shopping centers are set back from the road and lack curbside appeal, others added.

Driving down Route 100, "You can't see Mehuron's [Supermarket] because it's blocked by the backs of other businesses," one workshop attendee said.

To help overcome its less-than-ideal layout, The Valley could work on improving its signage, some business owners proposed, and many were in agreement that they could do without Irasville.

"It's confusing for tourists," one workshop attendee said of the sign demarcating the historic section of town. "They're driving down Route 100 looking for the center of Waitsfield and they think they've passed it," she said.

Other things besides signs that could help tie together the retail community are visual unifying features like the star lights that Waitsfield stores strung up last holiday season. "That really pulled The Valley together," one workshop attendee said.

Last Thursday, many business owners agreed that The Valley could benefit from a cohesive marketing message. "You come here and you can't easily digest what it is," one workshop attendee said. "It's not Stowe."

The marketing message most likely did not come out of last Thursday's workshop, but a lot of other ideas did. Of those that Floyd collected on Post-its and posters at the end of the evening, "There were so many that I simply hadn't heard before," she said.

Moving forward, "I'm going to magically organize them," Floyd said. "At the end of 10 of these workshops we are going to have a depth and intensity of information," she said. The MRVPD will present that information to the public this winter, "and the community is going to have to make a decision," Floyd said, about what it wants to focus on to ensure future economic growth in The Valley.