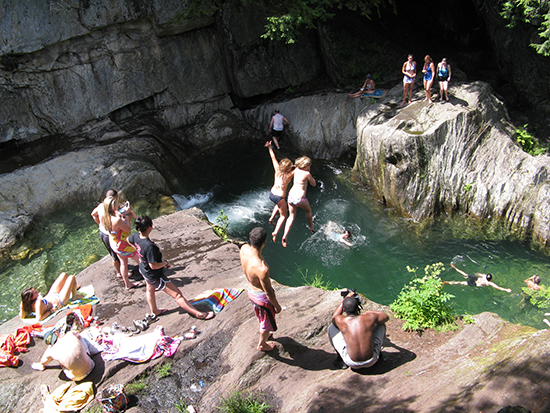 Last month Warren Falls made the top 10 in USA Today's readers' choice contest for the best swimming hole in the country, but some locals have mixed feelings about the national publicity.

When the outcome of the contest was announced on Facebook, some Valley residents expressed disappointment that Warren Falls was featured in the magazine. There are already too many people at the swimming hole, they said, and they worried about the consequences of even larger crowds.

When The Valley Reporter asked locals for its Valley Viewpoint question last week how they felt about Warren Falls' inclusion in the USA Today contest, some saw it as boon for tourism while others expressed reluctance to share the swimming hole with out-of-towners. Some longtime residents said that they had never even been to the swimming hole, despite—or perhaps because of—its increasing popularity.

The Mad River Valley Chamber of Commerce responded to the public's reaction to the national publicity with a press release saying the USA Today contest has "created the opportunity for dialogue about how to best maintain this natural resource," explaining that the United States Department of Agriculture Forest Service, which owns and manages Warren Falls, is seeking volunteers who are interested in collecting trash and taking on other stewardship duties at the site.

A few years ago, the forest service's Rochester Ranger District Office recreation program manager Holly Knox worked with the state and the town of Warren to design and construct a parking lot at the swimming hole which before had only a 3,000-square-foot dirt pulloff area that accommodated approximately 13 cars.

Today, the 15,000-square-foot gravel parking lot at Warren Falls contains defined spaces for cars and a lockable gate. A guardrail along the newly paved Route 100 prohibits parking on the side of the road, which had been a safety concern of the forest service.

"It's important to us that people can access the river," Friends of the Mad River executive director Corrie Miller said of the new developments at Warren Falls, which in addition to the parking lot include signs asking people to respect the natural environment. "Our job is to steward the resources of The Valley," she said.

As for the effects of the USA Today contest, "I don't know if it will cause more people to use that site... we'll see," Miller said of Warren Falls.

"We know that people here really like to have places to swim that are less known, and we keep those places sort of close to the vest," Miller said. "But Warren Falls hasn't been a secret for a long time," Miller said, "and maybe it's a good place to publicize and have people visit and show of the natural wonder and beauty of The Valley."

Those interested in volunteering their time to the stewardship of Warren Falls can contact the Rochester Ranger District Office at (802) 767-4261.