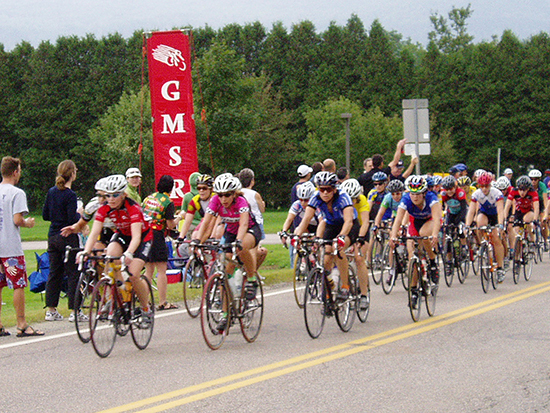 This year marks the 15th anniversary of the Green Mountain Stage Race (GMSR), which has called The Valley home for nearly all of its tenure.

The race brings 1,500 people (riders and their supporters) to The Valley for four or five days and nights, resulting in a big boost to the local economy just as summer is winding down. Many arrive early or visit during the summer to pre-ride the race courses. These visitors not only stay in the area but they do what any tourist does, including eating out, shopping and visiting other local attractions. Many return at other times of the year to ride, hike or ski.

While riders still have a week left to register for the GMSR, some race fields are already full. A look over the list of competing riders shows they are traveling from throughout North America and from as far as Europe to compete. A number of racers are coming from Alaska and the West Coast, from states including California, Washington, Oregon, Colorado and Utah. The race also attracts many Canadians and this year it has riders coming from nearly every province, including British Columbia and Alberta. So far, the European contingent is coming primarily from the United Kingdom.

The GMSR begins on Friday, September 4, and ends Monday, September 7. Riders race each day and must finish within a time limit in order to compete the following day. While there are winners in each day’s race, the big prize is to win the General Classification (GC), which is based on the total time it takes a rider to complete all four stages. The racer in each category with the lowest time is the GC Champion. During the GMSR, spectators can identify the leader by his or her yellow jersey.

Three of the GMSR’s four stages start and finish in The Valley. Stage 3, the Mad River Road Race, is the most feared and revered stage of the event. This stage has typically climbed at least two gaps with a finish on the summit of the Appalachian Gap—Vermont’s highest four-season roadway. Most fields will race 64 miles, including climbing up and over the Middlebury Gap. The Pro and Category 2 men will take on an extra 30-mile loop, climbing the so-called “Baby Gap” twice as part of that extra mileage. For those who enjoy watching athletic suffering up close, the App Gap finish is the place to be.

The final stage of the GMSR takes place in Burlington on Monday, September 7. Riders complete 25 to 50 laps on a 1 km closed course that starts on Main Street in front of Flynn Performing Arts Center. Riders travel at high speeds and make lots of attacks during the race.

A new kids’ event has been added during Stage 4. It is for kids ages 7 through 10 and will take place just before the pro races, which will guarantee a big, cheering crowd. Space is limited to only 30 riders in each age group (7 and 8 and 9 and 10) and the race will start just after 2 p.m. The event is free and all kids need is a safe bike and helmet. Any proceeds will go to support the Richard Todd Foundation, which was started in memory of a local cyclist who was killed in Hinesburg earlier this summer. Registration is available at gmsr.com/info.

Next week’s GMSR article will break down each stage, road impacts and the best places to spectate. Volunteers are still needed and those able to help can email This email address is being protected from spambots. You need JavaScript enabled to view it. or call (802) 496-5415.