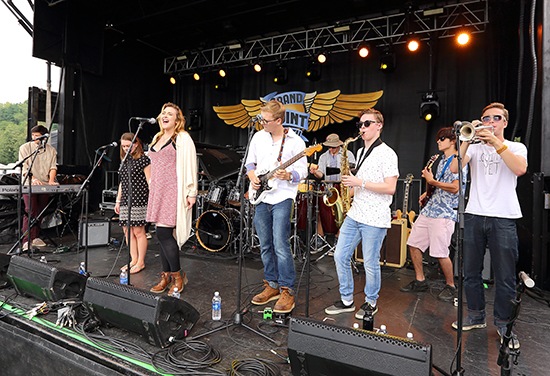 Good fortune befell the music lovers who congregated on Burlington’s waterfront Saturday to enjoy Grace Potter’s Grand Point North (GPN) festival. Not only did they get to enjoy the host’s electrifying concert as well as shows by other regional and national bands, they were witness to an extraordinarily mind-blowing performance by Nothing Quite Yet, the 10-piece rock/jazz/fusion/soul/reggae band from our very own Harwood Union High School.

These tremendously talented teens will no doubt look back on this concert as the launching pad for their successful careers. Someday, when Jon Baron and Matt Skelly are the respective bandleaders for The Tonight Show and Late Night, they will remember back to the comfortably overcast day when their masterful horn play during “Could You Be Loved” evoked memories of the great Tower of Power horn section.

While touring the states with Allison Krause, voice and violin virtuoso Merrill Woodruff will harken back to the afternoon when her powerful vocals on “Listen to the Music” kicked off the 2015 GPN fest head first. During Nina Sklar’s acceptance speech for her first Grammy Award for Best Female Jazz Vocalist, she will thank her former Vermont bandmates for providing the early instrumental soundtrack to her jaw-dropping vocal performance of “Dock of the Bay.”

After posing for the cover of Rolling Stone Magazine under the headline “Is he the next Elvis Costello?” bespectacled guitarist and songwriter Ben Burr will entertain his interviewer with anecdotes from his breakthrough concert on the shores of Lake Champlain, when he floored the crowd with his blistering lead guitar versatility and soul-devouring vocals on “Head Full Of Doubt, Road Full Of Promise.” Whenever Trevor McNeish channels his inner Angus Young while touring as guitarist for the AC/DC cover band, Dirty Deeds, he reaches deep for the steady rhythm that at one time had festivalgoers asking themselves, “How can that kid keep time when his head is bobbing all over the place?”

When performing in concert with his boy band, Clean Cut Dreads, keyboardist Colin Holter will often wax poetic with the crowd while he reminisces about his breakthrough performance when, for four minutes, his inspired voice transformed Burlington into the Jamaican seaside (check it out on YouTube). For years one of the most sought-after session bass players in the LA music scene, Eli Leppla struck pay dirt when he was handpicked by Keith Richards as the bass player for The Stones’ 60th anniversary tour. His audition tape, now a piece of rock history, began with his gut-busting bass and lyrical homage to Rick Danko in “The Weight” during a local music festival of his youth that left awestruck fans chanting, “Wait a minute, Chester.”

Drummers Enzo Cormier and Ben Read found success with their respective bands, but never quite recaptured the fun and unbridled musical enthusiasm of their youth. Backstage at a Bonnaroo festival, the old friends got together to watch a recording of their debut outdoor concert back in the early autumn of their senior year in high school. Equally adept at providing a deep beat pocket or stuffing the gaps with precise yet maniacal fills, the boys had supplied the backbone for the band’s front-of-the-stage talent. Acknowledging the inevitable, the seasoned drummers formed their own band, Thick and Thin, and play an 87-piece drum and percussion set on stage.

Grace Potter could not have been more welcoming to the band. She hung out with them before the show, took pictures, talked shop and even brought them into the catered band tent!

While buying a beer a little while after Nothing Quite Yet finished their set, I asked the pourer if he had seen the high school band that opened the show. His response? “Yeah man, who were those kids? They friggin’ ripped!” Indeed. Someday, you’ll say you knew them when. ...

Full disclosure: Ed Read is a member of the Fayston Select Board, father of a performer and a former drummer.

Harwood Grace Potter Nothing Quite Yet