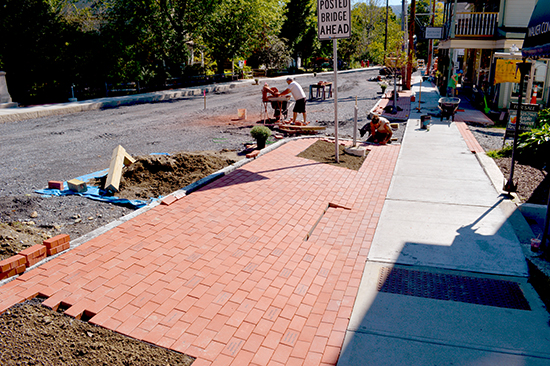 After extending the contract deadline for the Bridge Street and covered bridge construction project until November 30, the select board received the news that the pedestrian sidewalk for the bridge would be delivered by October 1, two weeks earlier than anticipated.

The select board, at its September 14 meeting, granted the extension for the project which has had the bridge and the street closed since mid-May. The project involves significant repairs to the covered bridge as well as its abutments, replacing the pedestrian bridge, repairing the stormwater system and repaving the sidewalk. The scope of work grew to include adding a decorative brick border to the sidewalks, streetlamps and benches, all of it funded through donations and all of that work handled by volunteers, led by AnnMarie DeFreest and Barbra Gulisano.

DeFreest and Gulisano brought the board up to date on their work and the help that they had from volunteers. They had 25 Harwood students, ages 14 to 17, helping with the brick laying a week ago, plus another 18 community volunteers working last Saturday, September 12.

“Ed Read at the Mad River Garden Center sent us two of his guys for two days at no charge to us, really qualified guys who busted their tails for 10-hour days,” DeFreest said. Additionally, they received lunch donations from Peasant, Mehuron’s, the Neill Farm, Village Grocery and others.

DeFreest and Gulisano asked the board about whether the contract included repairing holes in the roof of the covered bridge. The contractor, Alpine Construction, provided them with an estimate of $75,000 to replace the cedar shakes on the roof. Town administrator Valerie Capels clarified that the contract includes only reroofing the pedestrian sidewalk.

“I’ve been told that we could put a metal roof on there and it would be cheaper,” Gulisano said.

The board discussed the fact that reroofing the whole bridge is outside the scope of the project and not in the budget and ultimately decided to consider having Alpine Construction not reroof the pedestrian portion, getting bids for having the bridge reroofed in metal and with cedar shakes and determine if the work could be completed in a timely fashion before snow falls without going over budget. Capels also noted that she should be able to get at least one grant for at least 50 percent of the cost.

Later during the meeting, the board discussed the town’s latest sidewalk project with board members expressing dissatisfaction with the board that the town’s project manager and engineer had taken on planning the east side sidewalk without input from the board. The board had a site visit for the project on August 24 and at the meeting which followed told the project manager, Kevin Russell, and the engineer, Greg Goyette, that they were not happy with the proposed layout, the reduction in the amount of parking in the village, the impact on trees and green space, the crosswalk locations, the plan to extend the sidewalk out into the travel lanes with the crosswalks and other details.

At this week’s meeting the board discussed the fact that an ad hoc committee had met to work on the plan and had not reported back to the select board for board approval of the preliminary work. The board voted to suspend payment for the time to the project manager and engineer until the board could meet with Russell.