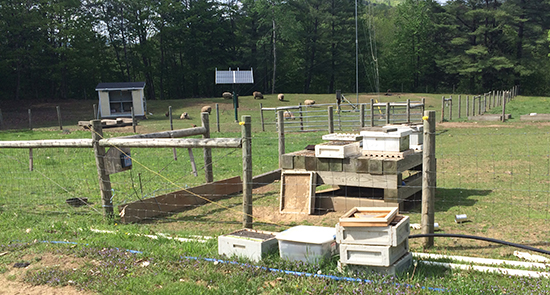 How many food scraps can a chicken eat?

That question arose during the most recent meeting of the Moretown Select Board, as the town discussed the Vermont Agency of Natural Resources’ (ANR) acceptance of Grow Compost of Vermont’s request to revoke their solid waste certification, explaining that because the Route 2 facility feeds all of its food scraps to chickens instead of directly composting them that it no longer applies.

Grow Compost is now considered a farm because the “ANR is saying that they’re composting only manure,” Moretown’s attorney Ron Shems explained on Monday, November 2.

But in order to be composting only manure, all of the food scraps the facility collects from local businesses must be eaten by chickens, “and everything I’ve read about this doesn’t address how much food a chicken can eat,” one resident said.

Other residents also questioned whether Grow Compost’s primary purpose is agricultural or commercial. In order for the solid waste certification to no longer apply to Grow Compost, “the amount of eggs they’re producing ought to exceed the amount of compost they’re selling,” one resident said last Monday, to which Shems responded that, according to state law, the facility’s annual gross income from farming must exceed its annual gross income from composting.

Last July, on behalf of the town of Moretown, Shems filed an appeal of the state’s revocation of Grow Compost’s solid waste certification, stating that it did not want to be held responsible for regulating the facility – namely fielding odor complaints from neighbors.

On October 29, Moretown received a letter from Alyssa Schuren of the Vermont Department of Environmental Conservation (DEC) to provide “clarification” of the department’s jurisdiction over odors and a “proposed solution” to the town’s concerns, she wrote.

Even without a solid waste certification, the DEC “acknowledges that the town does not have a direct regulatory role in addressing odor complaints or other environmental complaints from the Grow Compost facility,” Schuren writes.

“The Air Pollution Control Regulation (APCR) prohibits any person from emitting any objectionable odors beyond the property line of a premises,” Schuren said, and the DEC will investigate odor complaints at Grow Compost within one business day and will keep a log of the complaints, which will be made available to the public upon request.

According to Shems, the clarifications in the DEC’s letter “reflect the tightening up that was requested by the board,” he said last Monday of the state’s response to his appeal.

“In terms of managing the issues, this is appropriate,” Shems said, explaining that the DEC is taking a “more hands-on approach” to regulating Grow Compost than it may have previously seemed.

The next step will be to set up a meeting with ANR representatives, “and certainly there will be a public portion,” Martin said of the process, moving forward.

In requesting that their solid waste certification be revoked, Grow Compost also requested that their Act 250 permit be revoked. Unlike the ANR, the Act 250 district coordinator has yet to write a jurisdictional opinion on the matter and Moretown’s attorney Dick Saudek wrote a letter to the state asking him to wait a little longer.

“We are basically saying that ... until you meet the test of the farm we believe you should be considered a composting operation,” Saudek said of the Route 2 facility.

According to Saudek, the implications of the revocation of Grow Compost’s Act 250 permit are “pretty much the same” as the implications of the revocation of the facility’s solid waste certification, in that “the town doesn’t have the legal authority” to regulate Grow Compost, Saudek explained, “and as a practical matter it just doesn’t have the personnel to do it.”

So far, the Act 250 district coordinator has held off on writing a jurisdictional opinion regarding Grow Compost’s permit status and he may not have to. Grow Compost, the town and the state are currently talking, Saudek reports, “and we hope to figure something out soon.”