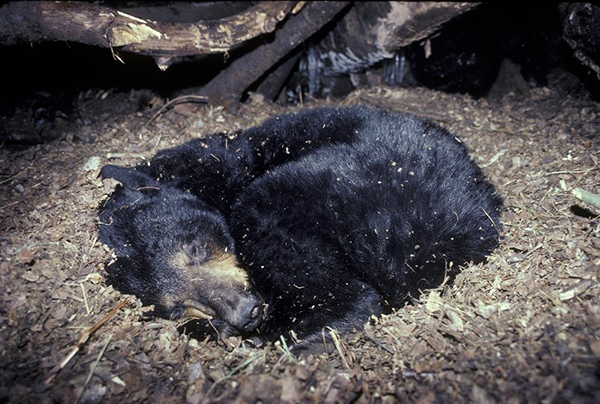 The Vermont Fish & Wildlife Department is urging people to wait for colder temperatures and snowfall before putting up bird feeders in order to avoid attracting bears. Normally, December 1 is the department’s recommended start date for feeding birds in Vermont, but this year’s warmer than usual temperatures, coupled with a particularly abundant foraging season, is keeping many bears from retreating into their winter dens.

This year, “everything that could produce a seed, did,” and an excess of beechnuts and other favorites are keeping bears – males more so than females – out and about, said bear biologist Forrest Hammond of the Fish & Wildlife Department. Strains of winter apples that were planted long ago, which stay on trees until later in the growing season, are plentiful, Hammond explained.

Recently, a Fayston resident reported to the department that a bear had torn the cover of his hot tub apart and the same had happened to his neighbor. “Chances are, the motor made a buzzing sound and the bear thought that there might be insects inside to feed on,” said Hammond. If temperatures had dropped significantly in a typical fashion for Vermont winters, such mishaps would likely not be occurring.

When bears do step into their dens for a four to six and a half month slumber, a lack of adequate snow covering their habitations means that they will sleep “less comfortably,” Hammond said. They will be less protected from weather and newborn and yearling cubs will be more at risk for predation by coyotes.

In a seven-year study that Hammond worked on in the 1990s, which looked at the effects of ski resort development on black bear populations in Stratton, he tracked bear movement during hibernation with motion sensor collars. He found that bears were more active when a thick layer of snow was not covering their dens. They woke up more often, which can increase metabolism, causing their fat reserves to become used up at a faster rate.

What does this mean? In the spring when they emerge, they may be nutritionally deficient and if food is not abundant that season, they can starve. Cubs are particularly vulnerable, as the nutrition they receive before hibernation is not stored as fat but contributes to body growth. If that process is interrupted in hibernation, they may emerge in a weakened state and die.

Hammond said that a lot of things will change for bears as the planet continues to warm, but that “they’re a fairly adaptable animal,” spanning territory from the cold Northeast to the deserts of the Southwest. Although articles in National Geographic and other popular sources predict the worst case scenario – total extinction – Hammond doubts that such an adaptable creature would disappear anytime soon.

However, they will face many challenges, he said. With climate change and increased development of land, food becomes less available and bears will need to travel further to find nourishment. In 2014, Hammond said that Vermont saw nearly 100 bears killed while crossing the interstate highway system in an effort to feed themselves and migrate toward new habitats.

Global warming will also bring an increase of parasites like ticks to the bear’s body and, “depending on how big of a picture you want to look at,” Hammond said that with rising ocean levels, more people will journey to rural areas, further depleting possible habitats for bears.

Hammond is currently involved in a long-term study that looks at the impact of industrial wind energy development in national Vermont forests of Stamford and surrounding regions—the first study of its kind in the country. Such development projects were permitted under the condition that companies fund research of the effects on bear populations. Using satellite collars, Hammond and other biologists can download bear locations to understand how they are interacting with land as it is developed.

The department recommends waiting for at least 6 inches of snow before putting out bird feeders and says that birds will be just fine without them, able to forage in fields and forests. Hammond said that black bears – almost always jet black with a brown muzzle and some with a white crescent on their chests – are here to stay in Vermont, and that “peoples’ actions really make a difference in how they relate to bears.”