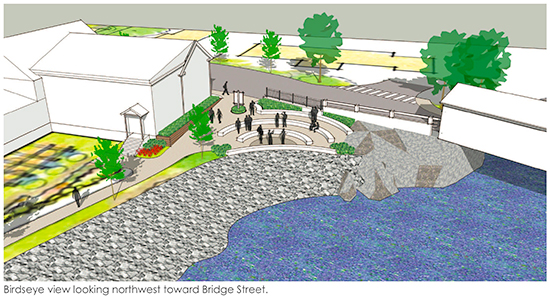 The Waitsfield Select Board will receive an update on a pocket park proposed for the empty land between the Peasant building on Bridge Street and the covered bridge at its January 11 meeting.

Joshua Schwartz, director of the Mad River Valley Planning District, will be on hand to explain the project as proposed and the grant that will fund 90 percent of the estimated $200,000 cost of the park.

The park is to be located where a photography studio was located before Tropical Storm Irene washed it away in August 2011. The town purchased the tiny parcel of land the following year. Plans to turn it into a pocket park were first discussed in 2013 as part of the Vermont Downtown Action Team work that took place in Warren and Waitsfield.

One of the things that work identified was a way to improve the intersection of Main Street and Bridge Street and also ways to improve the river front and create a park where the photography studio used to be.

The town and the planning district applied for and received a Vermont Community Development Block Grant to plan, permit and develop a park on the land. The original plans showed drawings featuring a concentric semi circle of concrete steps where people could sit or picnic. But because that land is in the flood plain, there are strict regulations governing what can be constructed there.

At previous meetings the town has discussed whether $200,000 (and the town’s 10 percent share of $20,000) is appropriate and whether something simpler should be constructed at the site.