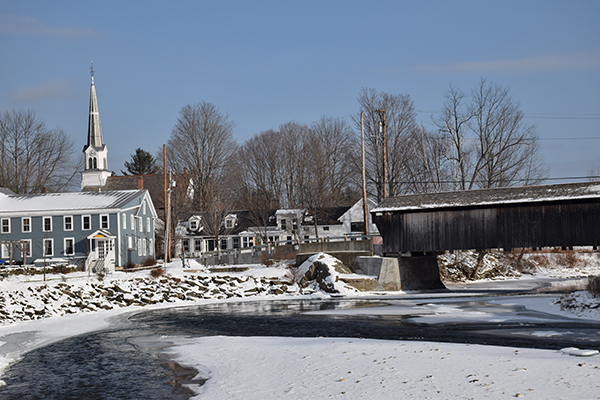 After a lengthy and extensive discussion, the Waitsfield Select Board voted to move forward with the next steps to utilize grant funding to design and construct a small park on half an acre of land between the covered bridge and the blue building that houses Peasant on Bridge Street.

The select board, at its January 11 meeting, met with Joshua Schwartz of the Mad River Valley Planning District, Steve Larosa, an engineer from Weston and Sampson, and several dozen members of the public.

The town purchased the land in January 2013. Tropical Storm Irene destroyed the building that had been on the site in August 2011. In December 2014, the select board voted unanimously to move forward with seeking grant funding to develop a park and at Town Meeting 2015 voters approved spending up to $20,000 for the project. 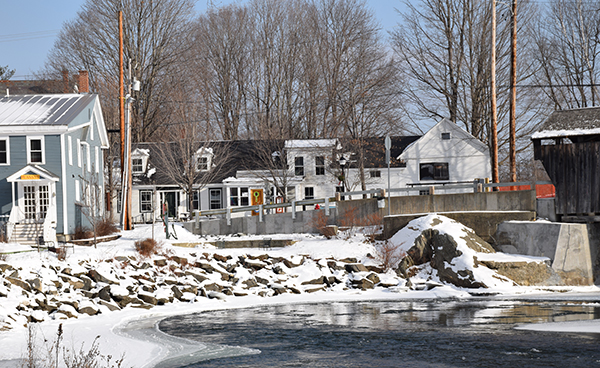 Since that time initial cost projections and very conceptual designs have piqued the interest of some town residents who are concerned that the park is too expensive and too expansive for the village’s historic downtown. The town has a received grant funds totaling $180,000 with a 10 percent local match.

Schwartz explained that the early conceptual plans were just that – plans to show the intent to the grant funding agencies – and said that now the town’s real work of creating a park that is appropriate for Waitsfield begins.

The project is complicated by the fact that the land is in the floodway and in the flood plain which limits the type of development that can occur there. Schwartz told the select board and the public that there are two things that need to happen to release the grant funding to begin the actual design and engineering work.

First the town needs to have an easement with the Gulisanos, who own the blue building that houses Peasant, which they have offered at no cost. Secondly, the project needs to go through a federal environmental review process, something that Weston and Sampson has been shepherding. The engineering firm has worked gratis since preliminary state funding ran out in December 2014. The cost of engineering is fully funded by the grant that the town received for the project.

“The next phase of the environmental review is ready to be sent. Valerie was just waiting for this meeting,” Schwartz said, referring to town administrator Valerie Capels.

He acknowledged that the project was complicated and complex and said that it doesn’t have to cost $200,000. He suggested that now is the time for the select board to create a review committee to work on the design of the project while the environmental review is finished.

“Why not do the permitting first?” asked town resident Jerry Miller.

“Because you have to have a design to do the permitting,” Schwartz said.

The project will require local review as well as state approval for flood plain regulations.

Select board member Kari Dolan asked why the preliminary concepts had objectives that seemed uninformed about the constraints of the flood plain and Schwartz explained that this is a design/build project, meaning it is being developed to meet the flood plain constraints and the desires of the town.

Retired architect and town resident Bob Burley urged the board to be cautious about creating a park that is more urban and sophisticated than Waitsfield needs and Myndy Woodruff, who lives across the river from the park location, urged the board to keep it simple and let Mother Nature have her way.

Town resident and Realtor Neil Johnson voiced concerns that the project could not meet setback requirements from the river while town resident and conservation commission chair Phil Huffman urged the board to follow through with the vote they took in December 2014 and which voters affirmed at Town Meeting in 2015.

“Let’s take the time we need to figure out the right design for the character of our town, let’s work through the environmental constraints and the permitting requirements. Let’s not go backward,” Huffman said.

Dick Kingsbury reminded the board that there was no flooding for 70 years when towns used to be able to remove gravel from the river.

Board member Sal Spinosa made a motion to move forward with the project and a contract for Weston and Sampson, which Logan Cooke seconded. The motion passed with Spinosa, Cooke and Dolan voting yes, Scott Kingsbury voting no and board chair Paul Hartshorn not voting.