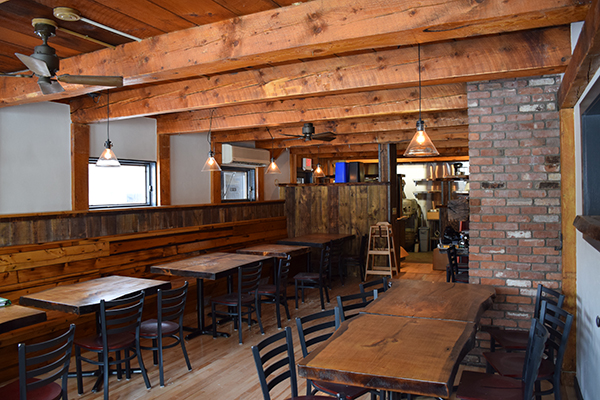 It would be too cliché (and inaccurate) to note that the opening of The Blue Stone in Waitsfield is akin from the former Den restaurant rising like a Phoenix from the flames – although the brand new-interior and exterior enhance the cliché!

But here’s the deal. While the building has been extensively renovated, repaired, taken down to the studs and the floor joists and propped up, and while it has new siding and new windows and a new entrance for takeout and handicapped parking and access and BATHROOMS PEOPLE CAN TURN AROUND IN, it’s not going to be The Den incarnate. It’s The Blue Stone, people!

Chris Fish, one of the two owners of the beautifully updated restaurant, said he wants to make clear that he and his partner, Vinny Petrarca, are building on their successful model in Waterbury of pizza to eat in and out along with a menu that features salads, sandwiches, appetizers and their famous Blackboard pizza. Oh, and beer. At least 16 special brews on tap, maybe all 19 that are available in their Waterbury location – or maybe not.

Walls are gone, doorways are moved and windows are plentiful and larger. The kitchen is expanded. The deck is expanded and there is incredibly beautiful woodwork everywhere including in the entry room where the bar is located. Petrarca said that the kick plate around the former bar (where wet boots dripped) had rotted and molded and that the floor was caving in under it, requiring some floor bolstering.

The entrepreneurs opened their Waterbury Blue Stone in 2012 with Petrarca in the front of the house and Fish in the back and their significant others waiting tables. The business took off and strategically they closed that business for short periods of time to renovate and improve. Their wives no longer wait tables with them and they have been able to hire a manager to oversee the Waterbury operation, which in part freed them up for the renovation project in Waitsfield that was far more extensive than they knew.

“We did as much as we could ourselves,” Petrarca said, noting that Fish grew up with a carpenter for a dad and absorbed a lot of his skills. They bought the building from Mark Akey at the end of the summer and immediately got to work. The deck has been expanded and the owners expect that they'll be able to seat close to 90 people in the summer.

The wooden slabs that make up the tables and counters are homegrown hardwoods that were sourced in New Hampshire and there is an incredible bench that runs all along the north side of the building which was created by Hollis Pratt using boards from the grain silo on Fish’s father’s barn.

Fish lives in Montpelier and Petrarca lives in Middlesex and they’ll be in house daily so when the doors open next Wednesday, January 27, stop by and say hi and have a slice.