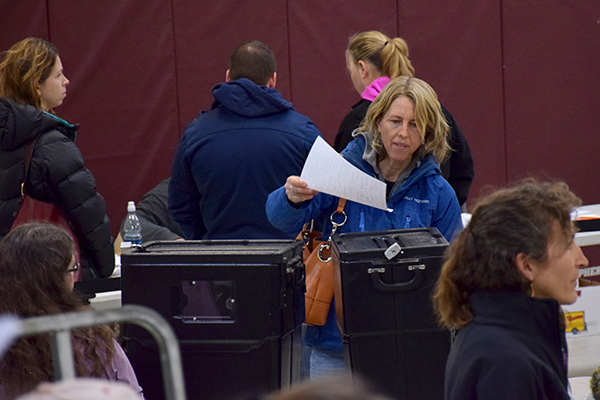 On the local level, Warren voters passed over articles calling for the town to fund and rebuild the village timber crib dam after extensive discussion. Warren Dam Preservation Trust chair David Sellers suggested the town create a specific zoning district in the village for the river, dam and bridges but did not prevail.

In Fayston, outgoing select board member Robert Vasseur was feted with applause and a student-made video after serving on the board for 57 years. Chuck Martel was elected to that seat on the select board.

In Waitsfield, the first-ever evening meeting attracted a full house, which was the hope of the town committee tasked with finding ways to increase Town Meeting participation. Waitsfield voters peppered the select board with questions on finances and town spending during the meeting.

Duxbury voters elected four new select board members, a new town clerk and new town treasurer in a Town Meeting that featured a lot of hand counts for votes.

Moretown voters raised pointed questions about costs versus efficacy at the Washington West Supervisor Union offices as well as Act 46. Moretown voters spent a fair amount of time discussing VTrans’ plans for the bridge on Route 100B over the Mad River at the south end of town. VTrans has recently made that bridge one lane due to safety concerns with the bridge, and voters wanted to know how long it would remain that way.

State Representative Adam Greshin, I-Warren, visited every Valley Town Meeting addressing education costs and providing details about the possible legalization of recreational cannabis. With bill S.241 passed by the Senate on February 25, Greshin told voters that the bill will be reviewed by multiple House committees before it comes to a final vote. Vermont, Greshin said, will be the first state to vote legislatively to legalize marijuana, rather than by ballot initiative. He sits on a committee that will assess issues of taxation.

Throughout The Valley, voters had questions about education funding, Act 46, marijuana legalization and more. The Valley’s other state rep, Maxine Grad, D-Moretown, was unable to attend this year’s meetings due to a family issue.