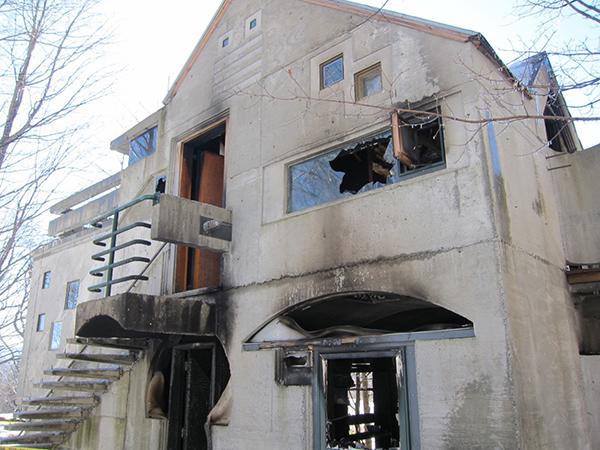 What happens when the interior of an all-concrete house catches fire? The house remains standing, including some floors, while the fit, finish and furnishings go up in flames.

At least that’s what happened last Saturday night, March 5, when David Sellers’ all-concrete Archie Bunker on West Hill Road caught fire. The house was rented through AirBnB.com to a woman and her three teenagers and puppy for the weekend.

Sellers reported that the family returned to the house after skiing and lit a fire and then went out for dinner.

“They came back and opened the door and smoke came billowing out. The puppy was in a cage in the living room. The woman ran in, got the puppy and ran out while the daughter called 911. She left the door open and by the time the fire department came the interior was a big ball of fire,” Sellers said.

Warren fire chief Peter DeFreest said it seems like the fire was woodstove-related and that it started in the upper floors.

“We don’t know how long it burned. The heat transfers from the chimney to any wooden particle that was near it. The woman got the dog out about the time it was about to flash over,” DeFreest said. 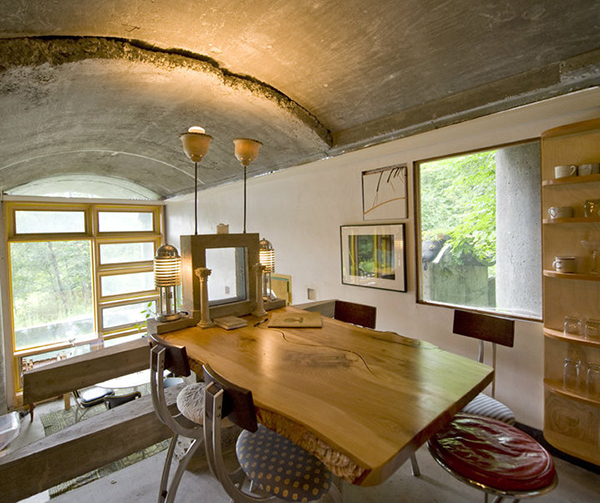 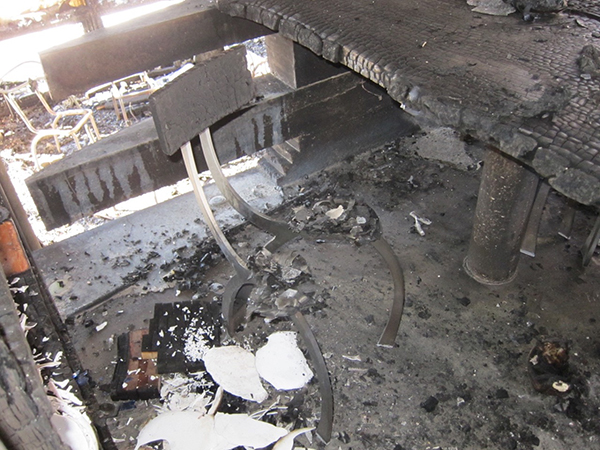 Flash over, he explained, refers to what happens when an oxygen-starved fire gets oxygen.

“First the place will fill up with smoke. If the fire can’t vent it starves itself of oxygen and smokes a lot. If something breaks through, the smoke explodes, because it is flammable. She probably started the process of flashover when she went in to get the dog. The outcome could have been worse had she gone in five minutes further into the fire’s progress,” DeFreest added.

Waitsfield and Moretown’s fire departments were called. Waitsfield’s arrived and Moretown’s was turned around before they got there. DeFreest said they had the fire knocked down in about 90 minutes and then spent three hours mopping up.

“The cement house was a unique situation. There were disadvantages, such as it kept the heat in, but the floors stayed intact and we were able to use them to our advantage,” he said.

Sellers said that he had talked to state fire inspectors, DeFreest and others on fires and he learned that people should not open doors when there is a fire, for the very same reason the fire chief explained – feeding oxygen to the fire can cause an explosion.

“She’s lucky to be alive,” Sellers said in reference to his renter.

“Fires are dangerous when they smoke and it’s dangerous to leave a fire unattended. A spark as big as the head of a match can fly into the rug and catch and fill the place with smoke,” he said.

“The building was almost 99 percent intact after the fire. This was our first experiment in this medium,” he said.

He had forms for the brick arches found in The Pitcher Inn in Warren given to him by contractor Hoover Austin and used those to frame in the Archie Bunker. It took three years to complete the house. Since completion it has been used for board retreats, residential rentals, weddings, photography shoots, client meetings for Sellers’ architecture practice and other uses.

Sellers plans to rebuild as soon as the insurance gets sorted out.

AirBnB.com, he said, has a million-dollar policy for people who rent and he said he is in discussions with the company.

“I doubt they’re going to cover much. Their insurance company gave us a bunch of deadlines and 48 hours to report when we’ll submit detailed costs and damages. If we don’t meet the 48 hours, to the hour and minute of when they sent the email, they don’t cover anything. And that was in an email which we realized we had to respond to in the next six hours,” Sellers explained.

“We have until Monday to get our list in and I’m also in discussion with my own insurance company. That building had a very high quality of finish and was filled with lots of antiques, probably $100,000 worth of notable works of art and furniture, plus custom finish work. The loss probably totaled between $800,000 and $900,000,” Sellers said.

He plans to rebuild as soon as the insurance gets sorted out and was surprised by how fast the news spread and the more than 100 emails he received from all over the country and the world.

“People love the building and want to help. Others have said they’d help rebuild. We’re going to have a big cleanup party, clean everything up, have a band and a barbecue. Then we’ll sort out how we bring it back – because the structure is there,” Sellers said.