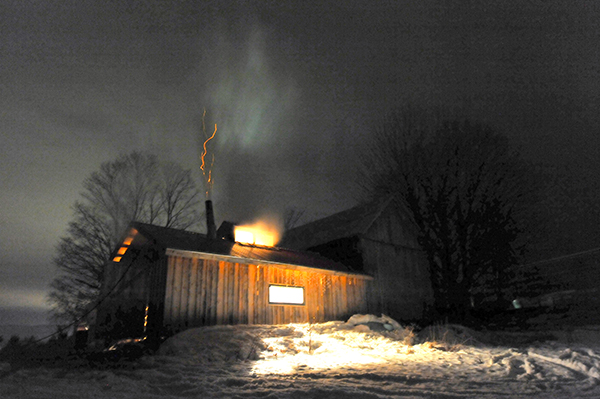 The Mad River Valley Food Network – a group formed in response to the 2015 Economic Vitality Series in which participants offered feedback to the Mad River Valley Planning District and Mad River Valley Chamber of Commerce about doing business in The Valley – continued to strategize prospects of agritourism and branding.

On March 22 at the General Wait House, farmer and business owner Dave Hartshorn shared plans for The Valley’s first annual maple festival to be held at Hartshorn Farm on Route 100 on April 1 through 3 from 11 a.m. to 4 p.m.

Hartshorn will offer tours, maple demos and tastings, ox and cart rides and products like milkshakes and creemees. Other businesses will participate by offering products, such as Dori Ross’ Tonewood Maple, Lawson’s Finest, Mad River Distillers, American Flatbread and wellness business owner Amy Todisco, who will be selling maple soaps.

The group discussed the idea of hosting dinner events at Valley farms, such as a company called Feast in the Field that rents space from farmers and hires a professional chef to cater an elaborate meal with local ingredients elsewhere in the country. Such services have collected up to $200 per person, group members said.

One potential issue with such endeavors is that, according to Hartshorn, Mad River Valley planners don’t “want retail on the back roads.” But, he said, “If you want vitality, then you need to deal with policy.” He encouraged group members to attend planning commission meetings to have their voices heard and Liza Walker of the Vermont Land Trust said that farms who wish to participate in agritourism could at least “make them [the planning commission] aware of the impact” on their business ideas.

Mad River Valley Chamber of Commerce secretary and chair Peter MacLaren said that the committee should look at how The Valley stands apart from other agricultural regions in determining a marketing plan.

Group members talked briefly about a past Valley movement called Locavore – an effort that fizzled out a few years ago after having a fair amount of previous success. Members said that this effort was successful in that it brought consciousness about producing and eating locally – that “it just didn’t happen much before that,” one member commented.

Morris said that if the new group continues to emphasize a local food movement in particular, “you’re setting yourself up for failure,” as much of The Valley’s food is exported – perhaps a practical business model at this time.

But Hartshorn said, “It would be great if we were the region that had the most locally grown and eaten foods in Vermont.”

Morris pointed to the idea of using health as a “tremendous leverage point” to market Valley food sales and production and to possibly make The Valley known for health more generally. Products and services could be focused on fermented foods, for example – a dietary component that has received much attention in the recent past.

This strategy could connect the health of The Valley’s people and land, Hartshorn said.

Group members entertained ideas of creating a tasting center in Waterbury, where products could be sampled, and Round Barn owner Jim Donahue said that the Vermont Cheese Council is “talking about The Valley as a central cheese location.” They discussed events for producers, such as a market to showcase cheese, bread, wine and beer at the Round Barn.

In order to accomplish all that the group has conceived, “We need someone who can dedicate several hours a day,” MacLaren said. He explained that with local event planning and grant writing, there is enough work for a full-time position, whereas the group is currently moving more slowly than they would like, due to its volunteer-based nature. “How we fund that is a big discussion,” he said.

Aaron Locker of Kingsbury Farm said that the group could approach funding like members of a co-op, each member funding a portion of what is needed and receiving financial return in the future. “Getting grants takes forever,” he said.

MacLaren added that the issue with such a model is that the entire Valley community would benefit from the growth of food industries, but only some [the group members] would contribute.