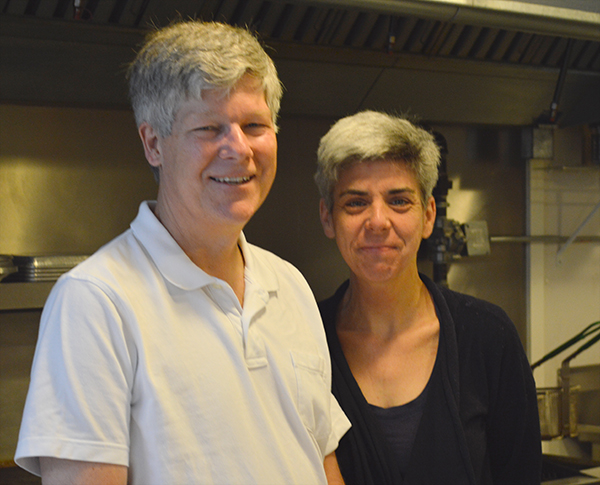 Woods, Warren, and Wenner, Moretown, are currently renovating and updating the space that was Jay’s Restaurant for many years and more recently home to Phantom at Mad River Green Shops.

The 60-seat restaurant will focus on local fare as well as food produced in Vermont.

Woods and Wenner are unlikely partners who know each other through mutual friends and through East Warren Community Market, which Woods managed from 2009 until late this winter.

DRIVEN BY OUR KIDS

Wenner recently moved to Moretown with his wife and two sons, Kurt and Derek. He spent more than two decades working in finance for the Federal Reserve Bank to try his hand at a second career. He tried teaching and a few other jobs, but they weren’t quite what he was looking for.

“Our move here was driven by our kids’ desire to live in Vermont,” he said.

When he and his wife decided to relocate to Moretown where they had a second home, he happened into East Warren Community Market one day where he had a conversation with Woods that led to them discussing opening a restaurant.

“Don came to see me at the market and it came up in conversation and the next thing we knew, we were working on a business plan,” Woods said.

“I sought Ashley out last fall and told her I was trying to become a local. She said she was looking for something different and had become restless,” Wenner recalled.

“My part in the East Warren Community Market was done. We opened on Labor Day in 2009. The market board and the community were amazing. We set a bar and answered to a community that wanted good local food,” Wood said.

“Our focus here is food for everyone. People want to know where their food comes from. People are super amped up about local products. We’re going to sell a lot of local meat and Vermont food. We’re basically doing a Vermont-style grill. We plan to grind our own burgers and have an awesome retro salad bar,” Woods said.

They started working with a Realtor and were looking at converting the former People’s United Bank building in Waitsfield into a restaurant but found the costs of conversion to be prohibitively expensive for their plan.

“Then this space opened up and our Realtor asked us if we wanted to see it. I came with my husband, Matt, who is our third partner and we also have a silent partner,” Woods said.

“This space has good bones,” she added.

“The infrastructure here is good and it became available very suddenly with no warning that Phantom was about to close. We were getting discouraged by the costs of converting the other property,” Wenner said.

They are changing the lighting, the seating and the paint, working with the kitchen and the bar and the flow in the restaurant. They’ve been testing recipes and planning menus. They plan to continue to use the outside space and while they like the idea of live music, they are going to focus on food first.

“We’ll slide into music as it fits for us,” Wenner said, and Woods added, “When we get to music, we’ll focus on the kids from Harwood and other local musicians.”

And, while they are going to focus initially on dinner (plus brunch on the weekends), their plan is to begin to offer diner-style breakfasts as well as dinner.

“We thought about lunch and dinner, but there are already great places to get lunch, including Three Mountain Café, which my friend owns. I didn’t want to compete with her,” Woods said.

“And we know there is a real demand for diner-style breakfast,” Wenner noted.

“As soon as the dust settles I hope to be the baker and focus on dessert. I’ll be the expediter,” Woods said, noting that Wenner will handle the finances and probably host.

“We’ll be open from 4 to 10 p.m., Monday through Saturday with a great kids’ menu that includes things you want your kids to eat,” she said.

“Our plan is to feed The Valley,” she concluded.