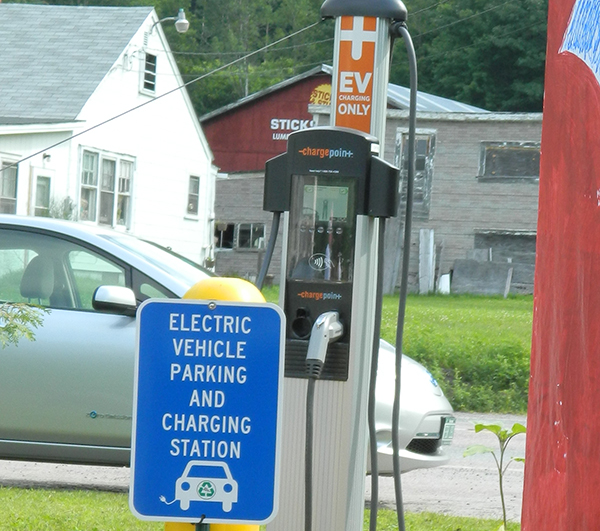 Last fall, Bill Powell of Washington Electric Cooperative (WEC) approached the Harwood Union High School (HUHS) board about installing an electric vehicle (EV) charging station at no cost, while also paying for five years of operating costs. The board ultimately decided not to proceed with the installation.

Harwood students want the board to reconsider that decision. At the HUHS board’s May 18 meeting, five students and several community members asked the board to revisit the idea at their June 15 meeting.

HUHS sophomore Renee Herring said the installation of the charging station would “show that our school is really focused on being energy efficient and cares about the environment.”

Zinn Wolf, another sophomore, said, “With the impacts of climate change becoming increasingly worse each year, having a charging station at our school would be a good way to put a clean energy impact on the environment – something we can do to do our part.”

Sophomore Thomas Young added that students were not included in the final decision last year.

“The school talks about how we’re [the students] so communicative with the administration, but we were kind of left out of this decision.”

Washington West Supervisory Union (WWSU) superintendent Brigid Scheffert Nease told students, “There never was any disagreement about the value – both the fact that it wasn’t going to cost anything originally and the value of sustainability. That wasn’t the issue.”

“It was some of the differences we have at Harwood, in terms of the implementation – not that those things might not be able to be problem solved,” she continued.

Scheffert Nease said that HUHS doesn’t have great cellphone service. This could be problematic because users will need to access the station online, using a plastic card that would be sent to them beforehand. What would happen if the station failed to work or if a car was left on school property?

“It was the logistics and the implementation of how the cards got issued, whose responsibility that would be, if folks would need to come into the school to deal with that,” she said. Other locations with EV charging stations that the students referenced, such as those in Burlington, offer access to phones and bathrooms, she added.

The board also consulted with an attorney. “Public schools, according to our attorney, are not in the business of going into business and so that created some concern for the board and the administration,” Scheffert Nease said.

Powell of WEC said that the company still has “interest to renew the offer we made a year ago.” With a year of experience servicing two stations in The Valley – one by the park and ride at exit 9 and another by Cabot Cheese – he sees that “those two stations are running and the numbers are very happy.”

The installation and first five years of operating costs of the station, an $18,000 value, would be covered by a grant received by WEC. Last year Powell said that after five years, the school could decide to discontinue the station or cover its network service cost of about $2,600 per year.

The school would set the electricity fee for users and receive 90 percent back. They could charge an extra 10 percent in order to break even.

HUHS board member Rosemarie White asked if the board could collect policies from two high schools that operate a charging station – Champlain Valley Union High School and Montpelier High School.

HUHS principal Lisa Atwood said that the school’s facilities staff could contact staff at those two high schools to learn about how the units are managed. She also asked those students who requested that the idea be discussed further to present a proposal to the board at the June 15 meeting.