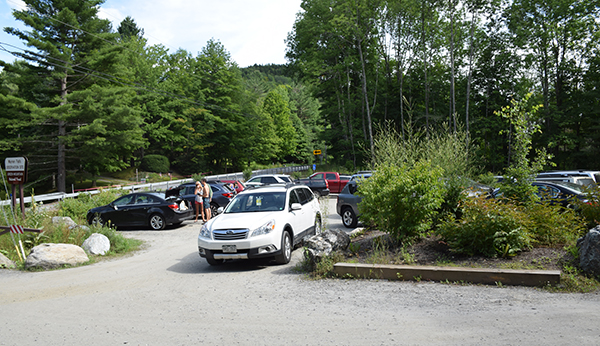 Facing the continued overcrowding at the parking lots for Warren Falls, the Warren Select Board reached out to VTrans with some suggested changes to improve the safety at the popular swim hole. As a result, people will again be able to park on the sides of the roads in some sections of Route 100 if they are completely off the travel lane.

On warm weekend days and even some weekdays, the regular and overflow parking lots at Warren Falls are completely full, which leads people to park on the sides of Route 100. That creates visibility issues for northbound drivers in particular, creates problems for a blind driveway and results in lots of people walking in the travel lane.

After discussing the issue of parking and considering whether drivers could be ticketed at a July meeting, members of the select board as well as Warren’s town constables and others wrote to VTrans with changes they felt would improve the safety at Warren Falls.

Warren asked VTrans to remove the No Parking on Travel Lanes signs and replace that with signs that stated No Parking, Violators will be Ticketed or Towed. The town asked VTrans to open up the old pullout in the northbound lane to let cars get off the road as they’d been able to do previously.
Warren also asked VTrans to reduce the speed, install two flashing yellow caution lights and add pedestrian signs.

“We realize that everything has a pro and a con, however, since the new construction of Route 100, closing the pullout, adding guardrails all the way, increasing the curve to a steeper grade, it has made this situation even more dangerous than prior to the construction. People could get way off the road completely off the traveled surface. The town and the Forest Service and VTrans should all work together and make some changes before someone gets killed at that location,” the town wrote in its July letter to VTrans.

Town administrator Cindi Hartshorn Jones and others attended a subsequent VTrans traffic committee hearing in early August to address their concerns, provide pictures of the problem and seek solutions.
Following that meeting, VTrans agreed to some of the town’s requests, including changing the signs from No Parking on Travel Lanes to creating a no parking zone on the section of Route 100 at Warren Falls.

VTrans is creating areas where cars can park off the road and out of the travel lane. No parking zones will be created near people’s driveways and the parking area to alleviate sight distance issues.
A seasonal speed limit sign with flashing beacons will be installed and will operate on weekend days. A reduced speed warning sign will be installed as well.