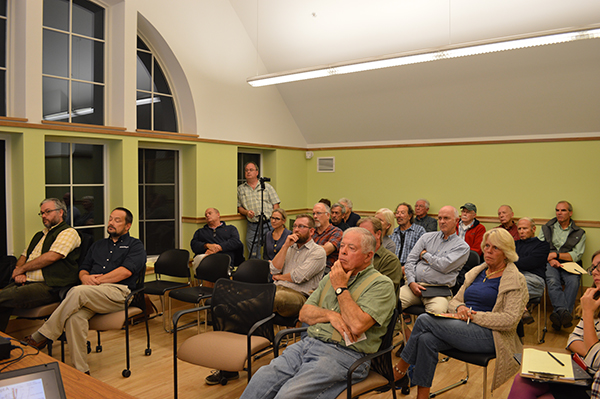 The next phase of Waitsfield’s Lovett Park project was presented to community members and the majority of feedback was that people wish nothing had been done.

Weston and Sampson, the engineering company hired to design the project, presented two concepts to the community on Wednesday, September 28. The second concept was the one that they preferred the community members see versus the entire design process.

After their presentation they asked for public comment and there were also comment cards that people could fill out anonymously, although they were not used.

The landscape architect, Dan Biggs, said that the team wanted to employ a naturalistic approach to the small space that has many permitting restrictions. The largest restriction is that after the construction is done there can be no net-gain of material in the area, meaning they are unable to add any volume to the space.

The first concept, Concept A, which they moved away from, they said, involved a ramp that would stretch from the parking lot behind The Sweet Spot to the existing entrance to the space next to Peasant. On both sides of the ramp would be “naturalistic” boulders and in the open space there would be an open-air pergola.

They said that building a ramp in the space would be very difficult because of the permitting involved.

The second concept, Concept B, kept the same type of path that is there now connecting the parking lot and Bridge Street and there would be steps leading up to the road. Concept B works around current structures that are there. They would place benches over the foundation wall and wooden paneling over the retaining wall by the road.

Concept B also includes stairs that would lead down into the water, which made some members of the audience question the town’s liability.

The designs will continue to be displayed at the Waitsfield town office for the remainder of this week.

After his presentations, Biggs opened up the room for comments and suggestions: “We’re definitely open to questions, comments. ... This is by no means done; we are just starting the process here,” he said.

Myndy Woodruff owns property across the river and was one of the first community members to comment. “I’m probably the person that most benefits or doesn’t benefit from what you do there,” he said.

“Of the concepts, I prefer Concept B because it enhances the existing foundation. My first choice is to do nothing,” he added.

Another community member spoke up about his experience with the area.

“It’s the most visited part of the whole Mad River Valley and I don’t care how much money you spend there – I don’t think that its going to make the quality of life any better for anyone or it isn’t going to bring one more dime to the merchants in Waitsfield, especially on Bridge Street,” the community member said. He noted that he uses the area a lot and has lived in the area for more than 40 years.

“I think we get the biggest bang for the buck by doing zero,” he said.

This sentiment was seconded by another audience member and she added that whatever is done should be done by community members.

Laura Brines of the Mad River Path Association said that she loved Concept B. “It’s simple. I love how it embraces the environment. I love the stone work and the natural planting and I’m all in favor of utilizing local businesses and garden clubs to make it come about. I just have a concern about accessibility [for wheelchairs],” she said.

Other members of the audience repeated that they would like a gradient ramp.

Biggs repeated the reasons why a ramp is very difficult in the space and added that the current ramp that is there is not compliant for wheelchair accessibility. They also said that it is accessible from the other side of the property.

“I’m just wondering the [cost] differential between cleaning things up and a couple of park benches and what you’re designing?” one audience member asked. There was no response to this question from any of the presenters.

Weston and Sampson will now go into a 30 percent design phase, which will have to be taken to the Waitsfield Select Board for approval. After that they will move to 60 percent and within three months they should be looking at a finished design.