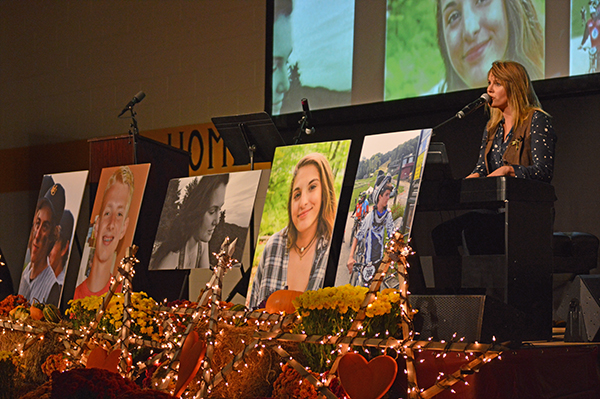 Residents of the Mad River Valley and beyond showed up in school buses, cars and on foot, students, educators and parents alike, to fill Harwood’s gymnasium for one final Celebration of Life.

At the October 24 event, friends, coaches and teachers spoke to the audience about the five local teens who were lost in a wrong-way car crash on October 8 – Mary Harris, Janie Chase Cozzi, Eli Brookens, Liam Hale and Cyrus Zschau. This performance was set apart from other services that have been held in that the friends and teachers who spoke painted a vivid picture of the lost teenagers for those who may not have known them well.

Both Washington West Supervisory Union superintendent Brigid Scheffert Nease and Harwood co-principals Amy Rex and Lisa Atwood spoke to the community and thanked them for the outpouring of support they have given Harwood over the past two weeks.

Between student speakers there were performances by Harwood students, and after everyone else had spoken, Fayston native and Harwood graduate Grace Potter took to the stage to perform her song “Stars.” Potter was, fittingly, behind pictures of Mary, Janie, Eli, Liam and Cyrus lit up by stars placed in from of them.

Eli Moskowitz recounted memories of skiing with Brookens, competing with him on days when the results didn’t matter as much as the great time that they had.

“Although he deserved to live 10 more decades and undoubtedly would have used them, Eli Brookens, philosopher, pet, pitcher, passionate skier, lover of the beautiful game, drank the 16 years of his life deeper than anyone I have ever met,” said Jonah Ibson, Eli’s former English teacher.

Libby recounted her first time with Cozzi, when she though Cozzi was a boy. She said she loved Cozzi’s positive and free spirit, “I have always loved Janie and I always will,” Libby said.

Anna Fortier spoke about Hale’s ability to make anyone he was with laugh, his impeccable sense of style and his fierceness of opinion. Both Fortier and Hale’s former teacher Kristi McKnight spoke about his willingness to share his opinions.

“He loved like no one else did,” Fortier said before adding, “We all need to remember and celebrate that we all were lucky to have spent the 16 years we did have with Liam. I’ll love forever and the spot you have in all of our hearts will never be filled because their just never will be another Liam.”

Lauryn Green had been friends with Mary since preschool. “Mary was my twin, the person I ran to, the sister I never had,” Green said.

Green described how loving, smart and happy Mary was and the love for her can be seen now through the numbers of people dying their hair blue in memory of her.

Eli Hammond spoke about his best friend Cyrus Zschau, with fellow friend Seth Beard standing by his side. Hammond told the audience of his time spent on Martha’s Vineyard with Zschau.

“I am sure I will make other great friends in my life, but Cyrus will hold the title of my best friend forever,” Hammond said.

After each speaker finished they presented flowers to the parents their friends, who were seated in the first rows.

Indy Ewald ended the procession with a meditation, in which everyone was asked to hold hands and close their eyes and remember fully the beautiful lives that were lost.