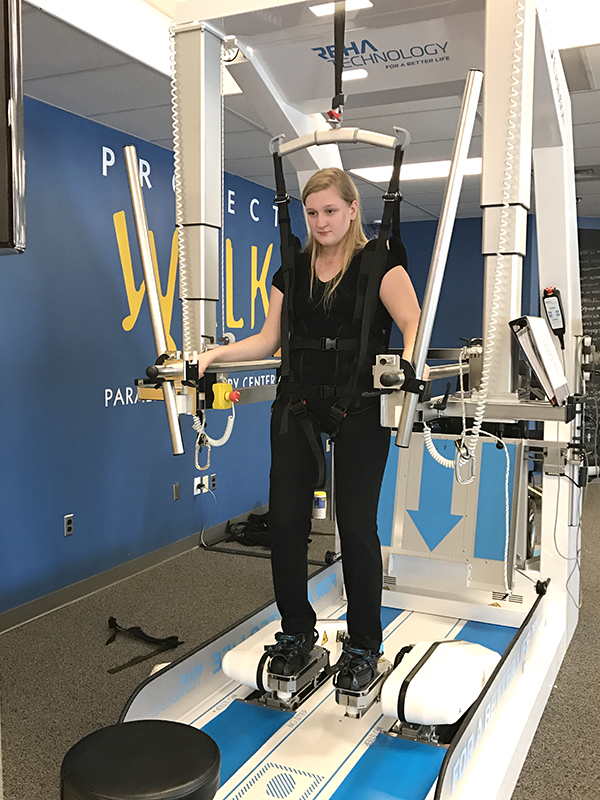 Friends, family and community members are rallying to help fundraise and construct wheelchair-accessible living quarters for Lily Stilwell, the 19-year-old Fayston woman who was left paralyzed from the waist down after an October car accident.

Tina Rich, Lily’s mother, said that the transition from Spaulding Rehab, where everything is wheelchair accessible, to the Rich’s home in Fayston has been challenging. She said that while community members helped extend the driveway, the house isn’t accessible for Lily to do basic things like make herself a cup of tea or brush her teeth.

Enter friends Trish Hopkins and Brooke Cunningham (both of Waitsfield) who were frustrated that Lily couldn’t even get into the bathroom. Cunningham contacted Waitsfield design and build school Yestermorrow where Buzz Ferver took on the project.

“After we got home on January 20, this project changed from having people help us create a bathroom to Buzz saying that Lily needs her own space and that they want to help give her that space. They are planning and designing her space now. It will be a room and bathroom and kitchenette and some outside space,” Rich said.

Yestermorrow is actually creating an ADA compliance class around the project and donating its time as well as helping to fundraise. All tuition from the course will go toward the cost of the project.

A GoFundMe site for the project has been created (www.gofundme.com/aroomforlily) where people can contribute to help the Yestermorrow class create her space. Friends had previously created a CrowdRise fundraising site for Lily that raised funds to cover medical expenses not covered by insurance – including her ongoing work at Project Walk. People can also contribute funds directly in her name to her savings account at Northfield Savings Bank.

Rich said that since Lily came home, the limits of her independence have become fully apparent. She needs help to bathe and brush her teeth and make a cup of tea and many other daily care activities. While she has gained back some of the upper body strength that she will need to move herself to and from her wheelchair, she is still struggling, her mom said. She needs help turning when she’s in bed at night and still takes meds five times a day.

“An apartment will give her a lot of things back. She’ll be able to prepare meals and get herself into the shower. The whole bathroom will be tiled and can get wet,” Rich explained.

Rich said that Lily is working extremely hard at Project Walk during her twice-weekly three-hour sessions. It’s a three- to four-hour drive to get to the facility in Stratham which makes for some long days for Lily and her mother. Right now, Project Walk is being funded from the CrowdRise donations. Rich has reached out to Blue Cross Blue Shield seeking some help in covering the Project Walk expenses but does not have an answer or an advocate yet.

“Physically, Lily is doing as well as she possibly could be and we are being as aggressive with the therapies as possible. She spends one hour of her three-hour session in a ‘go-system’ that walks her legs for her and has her climb steps. The whole time she has to concentrate on walking, thinking about it while she walks. That machine also has an active assist feature so they can see if she is bringing something to the movement. It’s really outside-of-the-box therapy. She works hard and it’s good for her. I’m seeing more progress mentally. She feels good about herself when she leaves here,” Rich said.

Rich has been so busy keeping Lily alive during the first few weeks after the accident and then getting her rehab organized that she hasn’t had time to collapse – she said the shower is a good place to cry sometimes.

“Eventually we’ll have some counseling or therapy. But we can’t go to that place right now. We have to keep pushing forward,” Rich said.

Lily, she said, has full recall of the accident that resulted in her paralysis from the waist down and when she was still at Spaulding, she became a mentor to a young girl who arrived after she did. Lily explained her accident to the young girl and was very open about it.

“It’s hard to ask for help. I don’t want people to think we’re greedy. We raised $16,000 from the first fundraiser and it is being used for Project Walk, which is so important for Lily. She is already worried about what will happen if the money runs out. We’ve told her not to worry. We’re just taking it day by day,” Rich said.

“We’re hopeful that the construction fundraiser is successful so that Lily can have some privacy and some independence,” her mom added.

On the night of the accident Lily was a passenger in a car driven by 20-year-old Andrew Baird IV, Waitsfield. He was charged with DUI, DUI greater than the legal limit, reckless endangerment and leaving the scene of an accident with serious bodily injuring resulting.

Baird and three others were arraigned in Vermont District Court on November 3. At that same hearing Dakota Gris­wold, Waterbury, and Jeremy Champney, Waitsfield, were charged with reckless endan­germent and accessory after the fact. Andrew “AJ” Wimble was charged with furnishing alcohol to minors with death/serious injury/motor vehicle accident resulting.

Tina Rich said Lily is likely to be called to testify during the court proceedings at some point.Fay