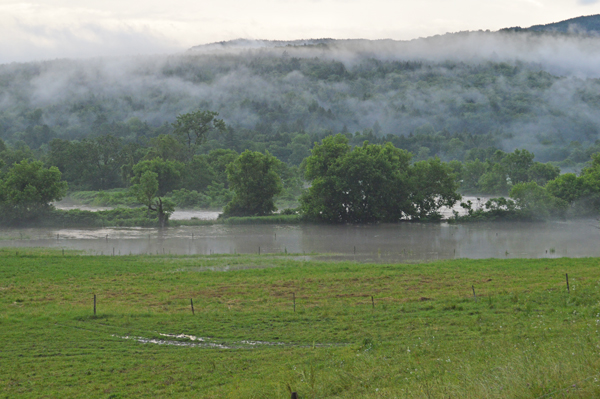 Farmers remained optimistic after a rainy May, but since then things have not gotten any easier.

Since June 1, almost 12 inches of rain has fallen on The Valley. Elwin Neill of the Neill Farm in Waitsfield said that some of his fields were flooded just a few days ago.

Neill farms about 10 acres of vegetables on top of his livestock operation and he isn’t able to use large portions of his land because of the rain. When it rains heavily and his fields sit underwater, his vegetable crops simply cannot grow, he said.

“We had fields underwater just a few days ago,” Neill said. Specifically, his fields flooded last Thursday and Saturday, July 6 and 8.

“When you get 3 inches of rain in 45 minutes, the ground can’t handle it,” Neill.

The Vermont Agency of Agriculture is urging farmers throughout Vermont who have been affected by the rain to track all of their crop losses.

“This information could be valuable for farmers, state and federal officials as they calculate the economic impact of the wet weather this spring and summer,” the agency said in a statement posted to their website.

Alison Kosakowski, communication director at the Agency of Agriculture, explained that weather events could occasionally be declared disasters retroactively. If they are, farmers could qualify for reimbursement, but they would need specific details on the specific weather event.

Since it is declared months later, the agency is telling farmers to keep track of everything now.

Neill has kept track of his losses in the past, but he has not kept track this year.

“The sun is shining, but I don’t know what it’s doing for us. We’ve seen so much moisture,” Neill said.

Some farmers who rely mostly or entirely on livestock worry less about losses in sales and more on their day-to-day production.

Doug Turner runs Simplicity Farm, an organic dairy farm in Waitsfield. Most of his crop production goes back into his feed. The farm grows all of its own hay and its own corn for corn silage.

“There are fields so wet that I can’t go in and hay them. So I’m going to have to go in and hay parts of them, and when the grass grows a second time hopefully I’ll be able to hay the whole thing,” Turner said.

Additionally, Turner said that he planted his corn on May 29, but they were never able to cultivate it because of the flooding. Turner said his fields have flooded four times this spring.

Farmers cannot simply work more or extend their growing season. As Neill explained, they will just have to make the most out of the time they have and hope the weather turns around.