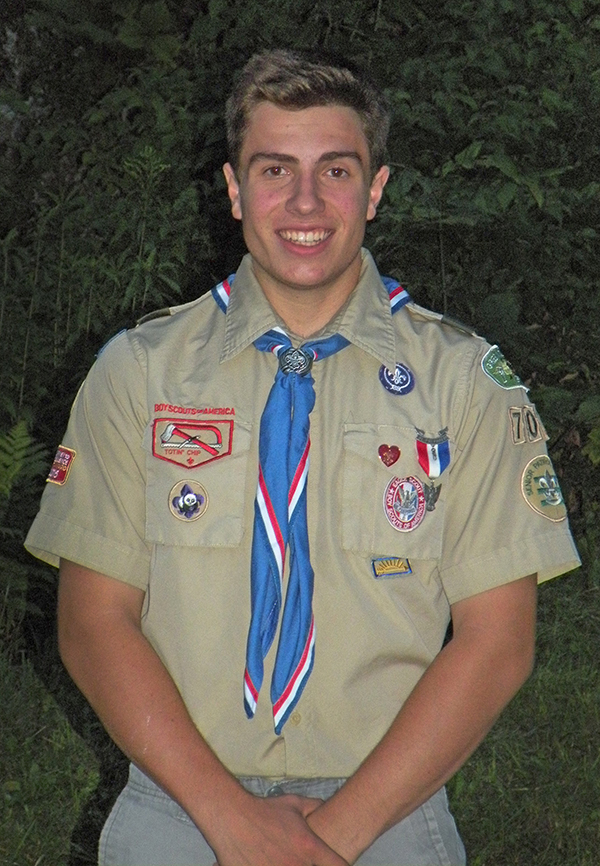 Chase Reagan, a member of Boy Scout Troop 700 of the Mad River Valley, recently earned the rank of Eagle Scout. Reagan was recognized at an Eagle Scout Court of Honor ceremony and celebration on the evening of July 1, 2017.

The rank of Eagle is the highest advancement award in Boy Scouts. Each Eagle candidate must earn a minimum of 21 merit badges, including 13 required badges, serve in leadership roles within the troop and successfully complete a service project within his community to earn the Eagle Rank. Only 3 to 4 percent of Boy Scout members ever attain this prestigious honor.

For his Eagle project, Reagan chose to focus on the Mad River with the intent to improve the fish habitat by improving the riparian buffer. He approached numerous landowners and community organizations before settling on a project. Reagan’s project teamed up the local Mad Dog Trout Unlimited and landowner George Carpenter to plant trees on Carpenter’s property to stabilize the riverbank and shade the river, ultimately improving the health of the river and the fish. Reagan worked with Mad Dog TU and Carpenter to establish a plan, map out the area to be planted as well as agree on trees suitable to both the project and landowner. On October 23, 2016, Reagan organized, led and directed 33 volunteers of fellow scouts, Mad Dog TU members, as well as family and friends as 200 trees were planted near the area known as Carpenter Rock.

Reagan joined Boy Scouts as a Tiger in Cub Scout Pack 798 in 2007. In 2012 he earned the Arrow of Light, the highest award in Cub Scouts, and transitioned into Boy Scout Troop 700. As a member of Troop 700 he has held several leadership positions with the troop including historian, quartermaster and senior patrol leader. On March 22, 2017, Reagan completed his Eagle Board of Review and officially became the 26th Eagle to achieve this rank in Troop 700.

Reagan, 16, is the son of Brad and Kelly Reagan of Moretown. He will be junior at Harwood Union High School this fall.

“Looking into the future I have a host of ideas, and paths. I do believe it is my responsibility as a Unites State of America citizen to give back to my country and community. I would like to be active in outdoor groups such as Trout Unlimited. Scouting has given me an edge on life, and something that will stay with me throughout my life” Reagan said.