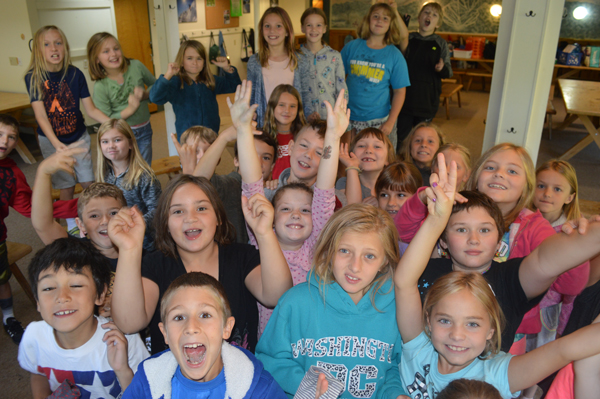 Warren Elementary School students are attending classes this week at Sugarbush’s Lincoln Peak after the discovery of black mold and asbestos kept their school closed longer than expected.

A roof leak on September 3 caused flooding which led to the school being closed for two days to remediate it and inspect for mold and damage. That inspection led to the discovery of pre-existing black mold as well as asbestos disturbed by the flooding and inspection. The inspection also revealed non-black mold related to the recent flooding. The asbestos was in the walls of two classrooms and the black mold in at least five classrooms.

The school was closed and Sugarbush Resort volunteered to host Warren Elementary School this week. Students arrived on Monday, September 11, to find their teachers holding signs with their grade numbers on them. The younger students are housed in The Schoolhouse, near the Gate House Lodge and the older kids are up the hill on two floors in the Valley House.

On September 11, shortly after school started, third- and fourth-graders cheered as workers working on the new Valley House lift passed by the windows, waving at kids as they rode the chairlift up the mountain. Kids are enjoying their access to the mountain with nature hikes and visits to nearby streams. Teachers and administrative staff are getting plenty of exercise hiking from The Schoolhouse building up the hill to the Valley House.

While staff and students got back to learning, mold and asbestos mitigation was underway at the school. Crews were working almost around the clock to get the school back open. Mansfield Environmental is removing the asbestos and G.W. Savage is remediating the mold and water-damaged areas.

“The air is being tested daily and quality is improving. Further, the air quality will be tested at the completion of the project. Finally, a procedure will be implemented which will result in testing air quality in each school on a regular basis. The frequency of these tests has yet to be determined,” explained Rosemarie White, a member of the Harwood Unified Union School District (HUUSD) and a member of that board’s facilities subcommittee.

White said that black mold at Warren Elementary School is not new. An inspection by the school’s insurer, VSBIT, took place in 2015 and identified black mold. Brigid Nease, superintendent of HUUSD schools, said that that earlier inspection led to two separate mold remediations.

White said that the old black mold had been taken care of and that the black mold discovered this week was new black mold that had appeared after the 2015 work. This summer the school underwent an extensive $2.55 million construction project that includes a new roof and new HVAC system as well as a new building envelope.

With the events of the last two weeks, a variety of insurance companies will be covering the costs and the costs to HUUSD are not yet known. Because all schools in the Washington West Supervisory Union School District voted to consolidate early under Act 46, costs after the July 1, 2016, merger are socialized throughout the district.

The contractor undertaking the $2.55 million project at Warren Elementary School this summer will cover some of the costs, as will the roofing subcontractor whose faulty work led to the September 3 flooding. The school district’s insurer will also cover a portion of the black mold remediation.

“As far as we understand to date, we expect our costs to be minimal because the simple repairs that fall on us are relatively inexpensive to fix and we have already been addressing those in-house with existing staff. The majority of mold and asbestos removal since the roof failure falls directly to the roofing and building contractors and their insurance,” Nease said.

Repairs to the roof leak that caused the flooding which led to the flood remediation and then the discovery of the pre-existing black mold and asbestos problem was almost completed as The Valley Reporter went to press on September 13. It is expected to be done this week.