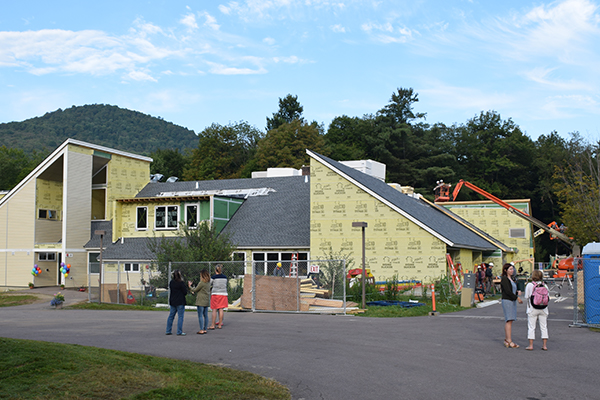 Warren Elementary School students, staff and administrators spent a second week at Sugarbush Resort after more mold was found in the kitchen and other pockets of the school. Additionally, a hot water heater in the kitchen failed and sent 150 gallons of water into the art room in the basement.

Work was already underway to abate black mold that was discovered in the aftermath of a September 3 roof failure that flooded the school. While work was being done to check for flood damage, pre-existing black mold was found and asbestos was disturbed.

The plan is now for students and staff to return to the school on Monday, September 25, according to Superintendent Brigid Nease.

School officials hired contractors to begin the work of remediating the black mold and asbestos and determining if there was any damage specifically related to the September 3 roof failure which was caused by a roofing contractor error. The roof on the school was being replaced as part of a $2.55 million project to rewrap the building envelope and replace HVAC equipment.

The school underwent a black mold insurance investigation in 2015 and two remediations for it in 2016.

Ray Daigle, director of facilities and operations for the Harwood Unified Union School District, said that the remediation work involves cutting out small pieces of sheetrock that reveal mold via air testing. It also includes treating wood surfaces where mold is indicated.

The discovery last week of mold in the kitchen came when he got word that there may be mold under the “dish pit.”

“We found it there on a 2-by-3-foot section, and on the sheetrock with trace amounts of asbestos. And the hot water heater blew up and the press relief valve dumped super-heated water into the floor below,” he said.

Mold has been found in multiple classrooms, and earlier this week some was found in the library as well, according to school principal Beth Peterson. Daigle said the amount of mold being removed was small, not giant wall-size portions that people might see in hotter more humid parts of the country.

In the kitchen, however, abating the asbestos and black mold will require replacing the whole kitchen floor.

Superintendent Brigid Nease said that “the kitchen was a blow.”

“It was not part of the renovation project and not part of the water coming in from the roof. Once the mold in the kitchen was found the whole kitchen had to be evaluated and now we have to phase in how to fix that,” she said.

As of press time, she said the plan for breakfast and lunch for Warren students is to have food prepared at Harwood Union and said kids will eat in their classrooms.

“The only spaces not able to be used are the art room and cafeteria. The air quality testing continues to be good. Yesterday, a small patch of old mold was discovered in the library behind a shelf where boxes of old computer equipment were stored and that will be remediated today. This library patch has nothing to do with the renovations or roof leakage as far as we can tell. The new flooring will not be installed until a vacation period. I am exploring the option and cost of having an industrial professional cleaning of the entire Warren School after all the projects are completed,” she said.

In response to questions from parents and community members about whether school choice could or would be reopened for parents concerned about having their child attend the school, Nease said while school choice closed for the year, the Harwood Unified Union School District has a specific policy on choice and other issues where the board can weigh in (like placement in a class and/or advancement to the next grade) if a parent doesn’t agree with the decision of the school principal and superintendent after submitting a written letter. Parents who want to appeal the decision of Nease and a building administrator would make a request from the unified union board chair for that appeal to be heard.

Beyond that, and in these specific circumstances, Nease said, “This is new territory for the board. The policy doesn’t allow parents to make choices in the middle of the school year.”

Nease said that the Vermont Agency of Education relies on clearance from mold/asbestos remediation specialists for the school to open. She said the agency did not ask for or direct the district to undertake schoolwide testing for mold. She said she had asked for the most extensive testing possible, without destruction – meaning taking the building down to the studs.

She said school officials will know when it is safe for kids to return when they receive that OK from the air quality testing.