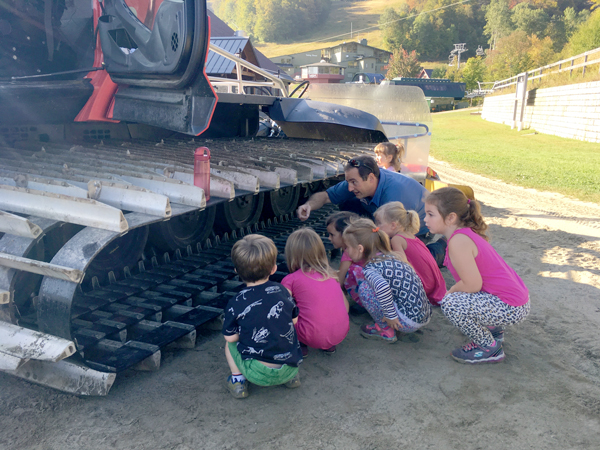 asbesIt’s been a tough start to the school year for Warren Elementary School students, staff, parents and a community and, hopefully, that’s all behind them now that the school has reopened after being closed for mold, flooding and asbestos since September 5.

While administrators, contractors and remediators were working around the clock to get the school open again, students and staff set up shop at Sugarbush where the on-mountain classroom offered many learning experiences and opportunities that their regular campus did not.

During their stay at Sugarbush, students were able to watch new lifts getting load-tested, they enjoyed nature hikes, they spent time with Sugarbush staff learning about what constitutes a healthy stream, they learned a bit about how grooming machines worked and they all got plenty of exercise hiking from the drop-off area to The Schoolhouse and Valley House.

Back in her regular office this week – which she said is not yet done or set up – she said the school was functioning as normal, with the exception of the kitchen (which is closed) and the art room. A hot water heater failure in the kitchen flooded the art room below and led to the discovery of mold in the kitchen.

According to Ray Daigle, facilities manager for the Harwood Unified Union School District, the kitchen will need to be deconstructed and reconstructed to deal with mold underneath the dishwashing pit.

School staff, teachers, custodians, friends and family worked last Friday, September 22, and through the weekend to get the school ready for opening day on Monday, September 25, Peterson said.

The troubles for Warren began with a flood caused by a faulty roof installation that was part of a major building envelope renovation that had been underway since June. That $2.55 million project was designed to basically rewrap and reroof the building and fix HVAC issues. The faulty roof seam led to flooding during extensive rains on Sunday, September 3, which initially closed the school until Thursday, September 7.

But, in cleaning up the flood, workers discovered asbestos that had been disturbed during the flooding and discovered pre-existing black mold. That led to an extended closure that saw kids start school at Sugarbush on September 11 with the intention of them being there for one week.

When the kitchen and hot water heater issue led to more mold and spots of mold were found in other parts of the building including the library, their stay at Sugarbush was extended another week.

Air quality tests showed that it is safe for kids to return to the school and while there are still parts of the $2.55 million project that are on deadline to be fixed by October 1, there are a few things that will wait for fall or winter or February break to be completed.

“For roof flood remediation, it's just the new flooring I mentioned last time that still needs to be done and my office (just needs a bit of painting as this point). Common areas (cafeteria and hallways) will likely be done over the Indigenous People's weekend and classrooms not until the February break to leave time for packing up and setting up once again (for four classrooms). For the renovation project, that is scheduled to be done by October 1 and it will be tight is the last word I heard. The punch lists are being done and the siding is still being finished,” Peterson said.

Without a kitchen, Warren kids are having their breakfasts and lunches made at Harwood Union and brought in daily, which Peterson said is working well so far, after only a few days.

“We’re still putting together our temporary kitchen and need some new outlets in the cafeteria for the equipment,” she said.

“For the kitchen, we are still assessing the situation. The remediation company will be removing the old floor and parts of the walls to see what is under them. We won't know the extent of the needs until then. Today (September 26) we got the room ready for that work to start by removing equipment. We need to work with our insurance company and get the full picture of the needs and then see what they will cover. They have agreed to the new floor and the temporary kitchen so far as I know,” she added.

Peterson herself is not dealing with the multiple insurance companies involved in sorting about liability for the leak, its damage, the attendant asbestos disruption and the pre-existing mold. That is being handled at the central office.