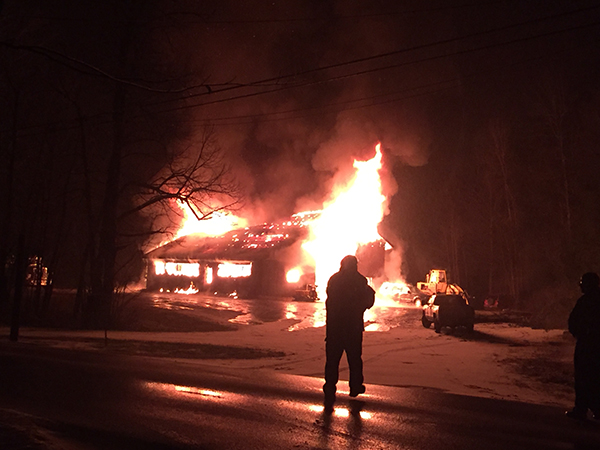 An explosion rattled the neighbors and destroyed Fred Viens’ shop and garage on North Fayston Road on Saturday night.

The December 9 blast caused a fire that burned the building to the ground, taking with it Viens’ tools, vehicles and more.

Waitsfield-Fayston fire chief Paul Hartshorn expected to meet with the Vermont State Police fire inspector on December 12, but a blizzard postponed that meeting.

“Fred lost everything he had in there. He has some equipment outside and a truck, but he lost one of his big trucks plus old trucks, plus all his tools, a lifetime collection of tools,” Hartshorn said.

The fire call came in around 8 p.m. and Hartshorn said that one of his Waitsfield-Fayston firefighters was on scene in three minutes and activated the Mutual Aid system, calling the Warren and Moretown fire departments to the scene.

“There were acetylene torches, gas tanks and who knows what else. The explosion could have been caused by all kinds of things. Being a garage there was oil, grease, tires. And once a vehicle catches fire you’ve got its oil and gas and tires. That makes for a hot fire,” Hartshorn said.

He said that the firefighters tore off the metal roof to get at the hotspots and also said that all three fire departments were able to quickly refill their tanker trucks using the fire hydrants that are part of Waitsfield’s municipal water system. Waitsfield-Fayston firefighters are able to fill their 3,000-gallon tanker in 3.5 minutes he said. All told, an estimated 15,000 gallons of water went on the fire.

Hartshorn said that between the three fire departments there were 40 to 45 firefighters on the scene from 8 p.m. until around 1 a.m.

“I don’t know how much of an investigation the fire marshal will do. It’s a formality that has to be done before the insurance company will talk to Fred. There’s no question it was accidental,” Hartshorn said.