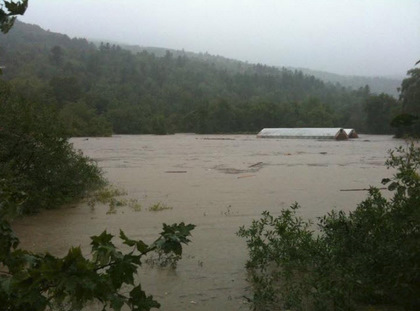 Just a week ago late blight was weighing heavy on the minds of local farmers. Losing their tomato and potato crops would be devastating and could turn a good season into a money loser. But now late blight seems like child’s play when it comes to problems that Valley farmers face after floods ravaged their fields on Sunday.

All of the farms on Route 100 from Moretown to Warren received heavy flood damage from Hurricane Irene. As the water receded, some fields looked better than others. But, according to the FDA all crops that have edible portions that have come in contact with floodwater should not be eaten or fed to livestock.

An alert to commercial growers in Vermont issued on August 29 stated:

Flood waters are likely to contain contaminants. These may come from upstream farms and rural septic systems, urban lawns and roadways, industrial sites or overflow from municipal sewage systems. Contaminants may include: raw manure or feces, agricultural chemicals, heavy metals or other chemical contaminants. Microbial pathogens that could be in flood waters include bacteria, viruses and parasites.

For these reasons, the U.S. Food and Drug Administration (FDA) considers crops where the edible portion has come in contact with flood waters to be adulterated and not to be sold for human consumption.

For most of the farmers in the Mad River Valley, this flood is the second big blow of the season. According to Deb White of the Gaylord Farm, “All the root crops for us are on second planting, the first was washed out by the May flood. We managed to scrape together seed money, time and people and get it all in again. Now it is gone.”

After losing most of his tomato crop to late blight in mid-August, Dave Hartshorn of Santa Davida Farm was looking forward to making up for some of the financial loss with his late summer and fall crops. “Since root crops are big money for us in the fall and we can’t sell them, it’s a huge loss and more so this year because it was one of the best years for things like beets and carrots, onions, parsnips, etc.”

Hartshorn continued, “My pride and joy--the best looking sweet potatoes I’ve ever grown--will never see the light of day. And the pride and joy of Labor Day weekend, sweet corn, grown and finished to perfection and perfectly timed for the biggest market weekend of the year, will only be remembered for the hours and hours of endless weeding,” Hartshorn said on Monday, August 29.

Farmers have not just lost their existing crops. According to the UVM Extension Alert, farmers must allow at least 60 days to elapse between flooding and planting of the next human food crop. For farmers like Aaron Locker of the Kingsbury Market Garden, this means he will not be able to seed his fields for winter salad mix this year.

Locker estimates the direct and indirect losses at his farm to be in the range of $75,000 between the existing crops he has lost that includes heirloom tomatoes, eggplant, peppers, herbs, celery, tomatillos and the last of their summer carrots and the potential income for the crops he will not be able to grow and sell during the winter months.

Some Kingsbury Farm crops were spared because they were on higher ground and others, such as carrots and onions, were harvested last week and are safely tucked away in refrigerated storage at the Mad River Food Hub. Locker notes that a large portion of those items were earmarked for Valley restaurants that are now closed indefinitely, further impacting his revenue stream.

Small Step Farm across from Yestermorrow appears to have lost everything as well.

Produce farmers are not the only ones affected by the floods. The Turner family, no stranger to disasters, has also had extensive damage at their farm. Brandi Turner relayed a message from her father-in-law Doug that in addition to losing 120 bales of hay, 12 acres of corn are flattened. Just because there is a disaster, it doesn’t mean that the cows stop lactating, but due to the power outage six milkings had to be dumped.

Among other issues that livestock farmers are dealing with is the decimation of their fencing. Both the Turners and Kenyon’s lost huge tracks of fencing; much needing immediate repair to prevent animals from wandering away. Doug Turner estimates their farm on Route 100 has three miles of posts and wire that need to be replaced.

The raging river and subsequent receding water did damage that will forever change the farming landscape in The Valley. The Kingsbury Farm lost 75 feet of buffer that was intended to keep the river and farmland protected from one another. Beds of winter squash are literally hanging over a ledge above the river which is now 150 feet wide; double what it was on Saturday night before the rains came. Locker estimates 150,000 square feet of earth, an area that is 75 feet wide by 200 feet long by 10 feet deep, has simply vanished. Three hundred fifty linear feet of riverbed lining the Turner Farm needs to be reinforced before any more valuable farmland is lost.

In addition to the loss of land, the other major issue that farmers face is a significant loss of topsoil. As an example, beds that were prepped for planting on Saturday at Kingsbury Farm were mounded eight inches above the ground. On Monday morning, those same beds were six inches below ground level with most of the topsoil being washed away. Locker says that he will scour the fields for what soil that has been left behind to rebuild the beds for next year.

The Mad River Valley Localvore Project is encouraging local food supporters to buy what little the local farmers have to offer and to consider paying more than what the farmers are charging. In a survey the Localvores conducted on their website, 88 percent of the respondents said that they would be willing to pay 100 percent more for produce from local farmers in this time of great need.

Some farms sell flowers, canned goods, eggs and meat that were not affected by the floods. For many of the farmers the money that they make on these products will need to keep them afloat until next spring; they are as good as gold and the Localvores encourage customers to consider that when they make their purchases. The Turner Farm is back up and running with their egg and raw milk operations. The Kingsbury Market Garden will be open its normal business hours as will the Gaylord and Hartshorn Farmstands. The Localvores are warning people to expect a lot less produce at the Farmers’ Market this weekend.

Financial assistance is also important both for short-term aid and long-term rebuilding. According to Valley resident and executive director of the Vermont Association of Conservation Districts Jill Arace, President Obama has made an emergency declaration for the state of Vermont. This declaration releases federal funding to support emergency management personnel and their activities while we're still in this emergency phase. At a later date, there will be further declarations that will release additional funds for both emergency assistance and reconstruction. Folks from various agencies are collecting data regarding damages to make requests for additional funds from Washington. Some of these programs will support repairs retroactively.

Arace reminds people affected by the flood who intend to make a claim whether they are a homeowner, farmer or local government, that they should, “document your losses with date stamped photographs before you clean up. Also document any costs you are incurring.”

The Mad River Valley Community Fund, a non-profit organization established in 1989 to specifically respond to the needs of Mad River Valley residents, has reopened its flood fund initially established after the 1998 flood disaster. Tax deductible donations can be made to the Community Fund directly by check mailed to P.O. Box 353, Waitsfield, VT 05673 or through the PayPal link on their website at www.MRVCommunityFund.org.

The Mad River Valley Localvore Project will continue to provide information about the impact of the flood on farmers through e-newsletters, at their website at www.VermontLocalvore.org and on their Facebook page.